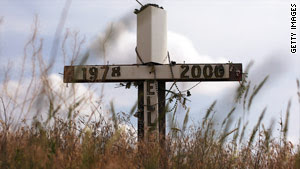 A three-judge panel of the 10th Circuit U.S. Court of Appeals ruled Wednesday that the 14 large crosses would be viewed by most passing motorists as "government's endorsement of Christianity."

"We hold that these memorials have the impermissible effect of conveying to the reasonable observer the message that the state prefers or otherwise endorses a certain religion," concluded the Denver, Colorado-based court. The state of Utah and a private trooper association have the option of appealing to the U.S. Supreme Court.

A Texas-based group, American Atheists, successfully sued five years ago to have the nonprofit memorial project scrapped, and the crosses removed from public property.
Posted by Palmoni at 8:52 AM