The permabears just hate it when investors supposedly "overlook" the fundamentals. Masbe they see something the permabears don't!! 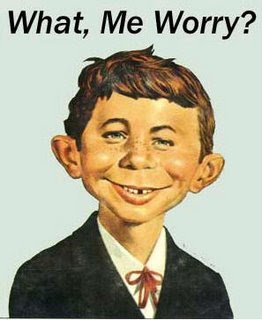 Barrons
Investors seem to be whistling by the graveyard; what, me worry?

A POLISH CHAP LIVING IN GERMANY went to the doctor, so reported the BBC last week, complaining of what he thought was a cyst in his scalp that turned out to be a .22-calibre bullet lodged in the back of his head. The bullet had not, fortunately, penetrated his skull and it was duly removed.

People get plugged all the time these days, of course, but supposedly this happened in 2004 or 2005. In other words, this poor fellow had been carrying around the bullet in his head for five or six years.

The victim, apparently, of a stray celebratory bullet fired at midnight during a New Year's party, the man claimed he was too soused to be aware of being shot but allowed as he felt as if he had received a blow to his noggin. So how come he waited all this time to do something about it? 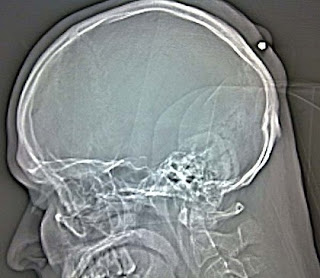 He explained to the police that although he did remember having a sore head, "he wasn't really one for going to the doctor." We can only conclude that not only is he blessed with a remarkably hard bean, but he also must have a visually impaired barber. Or, maybe it's the latest fashion in Germany to walk around with a bullet in your scalp.

To Société Générale's Albert Edwards, who recounts this incident in his latest market rant, the fellow's lack of awareness is akin to the blithe insouciance of equity investors to the prospect of the global economy sliding back into recession, accompanied by another leg down in the bear market. "The vast bulk of the investment industry," he exclaims, "fails to appreciate that we are locked in a structural bear market" that is about to enter its "final, even bloodier phase." 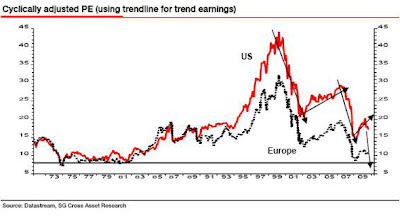 Albert repeats his oft-voiced conviction that the bear market won't end until stocks become dirt cheap, with the S&P 500 some 800 points below its current price of around 1050 and, equally important, "revulsion in equities as an asset class hangs in the air like a fog." 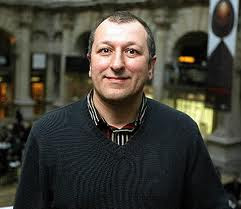 He contends that excessive valuation is particularly true of our market, but warns that other markets just about everywhere, even those less richly priced, will not escape the full fury of the raging bear. We think we're safe in characterizing his foreboding as not an optimistic forecast. However, his prediction of 250 on the S&P 500 does smack a bit of excessive devaluation.
But we second his notion that the surest sign of a true bottom will be when investors en masse become thoroughly sour on stocks—as they were, as we recall, at the end of the great 1973-74 bear market. Such total disenchantment was decidedly lacking in the aftermath of the dot-com bust and the 2008-early-'09 collapse, despite the enormous damage both ugly episodes wreaked on investors' net worth. Enthusiasm for equities was temporarily chilled but far from extinguished. As Exhibit A, we offer the rousing 80% rally from last year's depths.
-------------
That just shows how desperate the bears are. They quote a smack talking market bear that needs to go in the ring with a bull!!
Posted by Palmoni at 12:55 PM