Fed to downgrade outlook for US 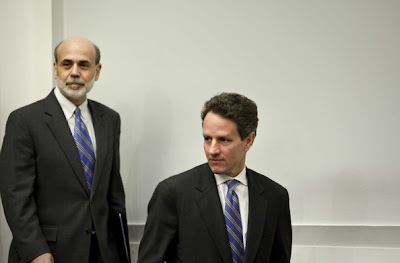 FT
The Federal Reserve is set to downgrade its assessment of US economic prospects when it meets on Tuesday to discuss ways to reboot the flagging recovery.

Faced with weak economic data and rising fears of a double-dip recession, the Federal Open Market Committee is likely to ensure its policy is not constraining growth and to use its statement to signal greater concern about the economy. It is, however, unlikely to agree big new steps to boost growth.

Smaller measures to help the economy could initially take the form of a decision to reinvest proceeds from maturing mortgage-backed securities held by the US central bank, thereby preventing the Fed’s balance sheet from shrinking naturally.

Investors will also examine closely any changes to the pledge made by the FOMC in June to “employ its policy tools as necessary to promote economic recovery and price stability”, which could be hardened if policymakers choose to signal the potential for more aggressive move to boost the economy in the future.

But even if that happens, most economists believe that it would take several more months of poor data for the Fed to actually begin a new round of asset purchases on the scale of those carried out during the recession.

In congressional testimony last month, Ben Bernanke noted “unusual uncertainty” in the economic outlook and in a speech last week the Fed chairman warned of a “considerable way to go” before the US achieves a full recovery.

(Notice how Bernanke and Geithner have been economizing--They've been buying ties at a two for one sale!!)
Posted by Palmoni at 8:36 PM