143,000 census workers off the polls, and the Government finally figured out that they had double counted some Census workers as they adjusted previous Government hiring lower by 50,000.

Previous months revised lower. Furthermore, the "civilian participation rate" has declined 0.6 percentage to 64.6% over the last four months. In other words, the Government assumes that all these workers who are no longer counted, are just folks like Brett Favre. So every month, the BLS overstates employment by 100,000 workers. 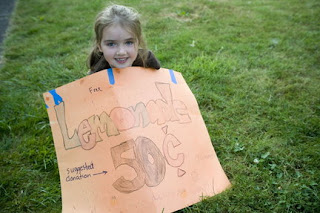 No word if Julie Murphy, the seven year old,  whose lemonade stand was shut down in Portland because she didn't get a $120 temporary restaurant license or face a $500 fine was counted by the BLS in the participation rate:

After 20 minutes, a "lady with a clipboard" came over and asked for their license. When Fife explained they didn't have one, the woman told them they would need to leave or possibly face a $500 fine.

Surprised, Fife started to pack up. The people staffing the booths next to them encouraged the two to stay, telling them the inspectors had no right to kick them out of the neighborhood gathering. They also suggested that they give away the lemonade and accept donations instead and one of them made an announcement to the crowd to support the lemonade stand.

That's when business really picked up -- and two inspectors came back, Fife said. Julie started crying, while her mother packed up and others confronted the inspectors. "It was a very big scene," Fife said.
Posted by Palmoni at 8:45 AM