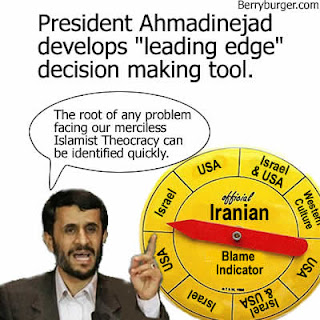 But first--we have a clarification on the "firecracker!"

Gaurdian
In Iran a homemade grenade often refers to a type of firecracker used to celebrate Chaharshanbe Suri, Iran's festival of fire, on the last Wednesday of the Persian year. The Iranian regime sees the celebration as un-Islamic and banned the sale of firecrackers in the country, resulting in many people making their own devices at home. The homemade grenades are not made to kill, although they are more dangerous than firecrackers and can cause death. Their use during a presidential visit would be highly unusual because of security concerns.

I'm surprised the firecracker wasn't determined to be thrown by  Israelis!
Posted by Palmoni at 10:08 PM