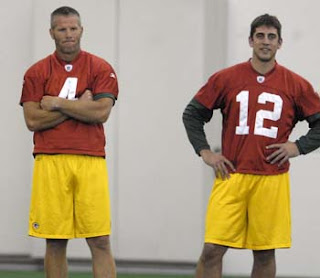 It is that time of the year again, with everyone wondering how the Brett Favre saga will play out for the year. With so many different scenarios possible (even though the end result will most likely be him ending up on the field), let us take a look at how this season’s story will end. Here is my Top Ten list, ranging from least to most exciting.

10) Brett Favre returns quietly, attending the end of preseason and being committed from game one. This makes for terrible television, and the NFL and ESPN would never allow it.

9) Brett Favre actually decides to retire. No one would actually believe this to be a final decision, but for the time being NFL ratings plummet 50%.

8) Brett Favre agrees to return, but with condition that Brad Childress serves as his personal butler for the duration of the 2010 season. This would be entertaining, except for the fact that we all suspect this was already the case last season.

7) With three teams already under his belt, Brett Favre announces his goal is to play for all 32 teams before he retires and demands trade to his next destination. Yep, you guessed it. Enjoy your backup role Jay Cutler.

6) Brett Favre returns to Vikings, but agrees only to play when team is losing in fourth quarter. This leads to Brett Favre setting single season record with 12 fourth quarter comebacks, including five on the last drive.

4) With the first game underway and Sage Rosenfels about to begin his first offensive possession, the lights go out in New Orleans. They almost immediately come back on, but this time with Brett Favre under center, who throws an 80 yard touchdown pass to Berrian.

3) After a season ending injury to Aaron Rodgers, Brett Favre decides to return but not to the Vikings. He demands a trade to Green Bay for Matt Flynn and picks, and goes on to win the Super Bowl in Green Bay further tormenting Rodgers.

2) Brett Favre and the Oak Grove High School team from Mississippi petition to NFL and become newest expansion team, replacing the Cleveland Browns. They go own to win a wild card berth, but are eliminated in the first round. (A Super Bowl win would just be ridiculous.)

1) With Sage Rosenfels at the helm Minnesota goes 13-3 in the regular season, and ride home field advantage and Adrian Peterson the whole way to the Super Bowl. With the game about to begin, Brett Favre comes up on the Megatron and announces he is coming out of retirement. The game is put on hold until he can arrive, and Childress replaces Rosenfels with Favre. The Colts go on to beat the Vikings 42-3.
Posted by Palmoni at 1:56 PM