In Iran a firecracker is a gernade 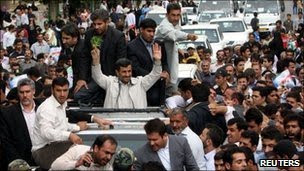 So Iranian President Mahmoud Ahmadinejad "survived" an "assination" attempt, when someone threw a firecracker, that was called a grenade by the media. Fox News dutifuly picke dup the story

The website, khabaronline.ir, says the blast took place Wednesday in Hamedan as Ahmadinejad was about to address a crowd


Al Alam, a state-run Arabic-language TV channel, reported that the firecracker was set off to cheer the president.

When that happens in Iran, we joke about it.

When the bears prophecy Armageddon on Wall Street, we don't even get a retraction!
Posted by Palmoni at 10:07 AM