"Get the F*ck off my property!" 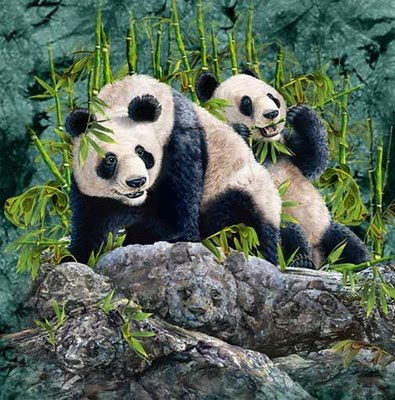 Today the Panda bears have been spotted everywhere!!

But the stock market, doesn't follow the economy. As everyone knows, we have a stimulus induced, steroid boosted, and speed laced economy, that is now going into detox.

But that doesn't mean the market is going to reflect that.

The stock market, hasn't reflected the travails of the average worker, or the lost wealth of the average American. It reflects corporate America's profitability, which has been supercharged on the back o fthe American worker.

Sometimes it is nauseating to be a bull on the market, because people then think you are a Pollyanna on the economy.

But who is in the market? Retail? Mom and Pop? They're gone. It's just an HFTmarket where stocks are pieces of paper being traded amongst prop desks--and it's our job to make money off of these pieces of paper.

Every once in a while, the actors on the stage, think that the market needs to reflect reality. Then the bears come out, trotting out their bearish thesis. And the public laps it up, because for the most part, they have lost so much money. They've lost money in their 401K, of which their employer no longer matches. They've lost money in their houses, and for a quarter of Americans, they're underwater in their home. The public is so fed up that their new hero is a flight attendant that took a ride down a Jet Blue slippery slide, who then took as slippery ride at home with his boyfriend, all because he told corportae America to take their job and shove it.

You have Washington DC, with an unemployment rate of 6.5%, because Governement's idea of productivity is the exact opposite of Corporate America. Hire as many people as you can; fire no-one, and give them lavish benefits that the private sector can't hope to match, unless you sare the overpaid CEO of a corporation that doesn't want to pay the worker. 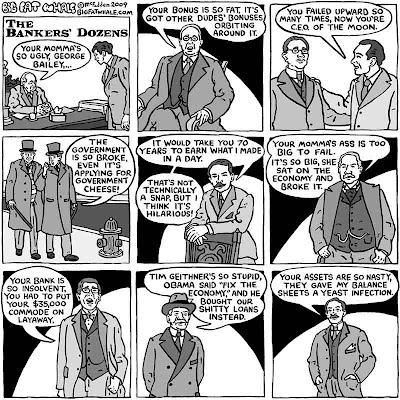 And its worse with the banks. The bankers are just underqualifed, overpaid Government workers in suits, who won't lend to even the most credit worthy borrowers. I know a person in Wisconsin with an 800 credit score, who had a $180,000 mortgage, who also had 36 acres, with a house and property easily worth in excess of $600,000, who couldn't get a loan because it wasn't farm property, and because the bank didn't know how to appraise the value, since there wasn't any nearby comps. I know someone else, whose house was just appraised at $1.3 million 9 months ago, in a beautiful, wonderful suburb outside of Milwaukee, with 6 acres, with a pool house, a regulation basketball court, and one of the most scenic places you would ever be. The owner told the Wells Fargo appointed appraisal to "get the f*ck off my property" because she wanted to give his home a $500,000 haircut because he had too many amenities that she couldn't value. $500K in the bank, a 800 credit score, a self-employed businessman making in excess of $250K, and Wells didn't want to refinance his loan. and lower the rate another point and a quarter, because they were already content with the spread they were making on his loan.  So they send out an appraiser that doesn't know sh*t from shinola!

So we have bankers, that would make a loan to anyone with a pulse five years ago, who now don't want to make loans to even the most credit worthy borrowers, or even refinance the loans they already have. A friend of mine in Phoenix, bought a million dollar house from foreclosure short sale for $295,000 cash, but it took him five months to get a mortgage on the property because he was self employed.

But it just means, that those in business, are doing business without the banks. So who needs the banks anyway?

We bailed out the banks, instead of letting them fail. And now, we still have the same idiots running the banks, when they are just overpaid Government workers, who are masquerading as bankers, who still don't know the difference between good loans and bad!

And, just as in Washington DC, the bankers, have gotten the ears of the politicians, because they've spent hundreds of millions of dollars lobbying.

So underqualified, over-hyped, corporate, beauracratic workers can work the purse strings of the Nation's workers and the Nation's capitol!

But despite that, you still can't get too bearish. 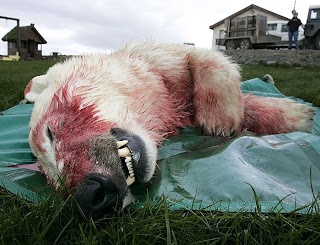 Because this is the picture, you'll see next week!
Posted by Palmoni at 10:35 PM

why next week? whats going on then?

Nothing next week. Pal is pissed off that shorts are making $