Turn off your Geo-tagging 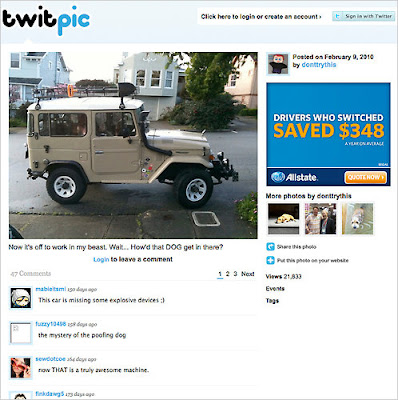 Here's the pic that Adam Savage had of his truck that he uploaded to Twitter. He got more than he bargained for.

NYT
When Adam Savage, host of the popular science program “MythBusters,” posted a picture on Twitter of his automobile parked in front of his house, he let his fans know much more than that he drove a Toyota Land Cruiser.

Embedded in the image was a geotag, a bit of data providing the longitude and latitude of where the photo was taken. Hence, he revealed exactly where he lived. And since the accompanying text was “Now it’s off to work,” potential thieves knew he would not be at home.

Security experts and privacy advocates have recently begun warning about the potential dangers of geotags, which are embedded in photos and videos taken with GPS-equipped smartphones and digital cameras. Because the location data is not visible to the casual viewer, the concern is that many people may not realize it is there; and they could be compromising their privacy, if not their safety, when they post geotagged media online...

By looking at geotags and the text of posts, Mr. Sommer said, “you can easily find out where people live, what kind of things they have in their house and also when they are going to be away.”
“Our intent is not to show how it’s done,” he said, “but raise awareness so people can understand their devices and turn off those options if they want to.”

ICanStalkU.com, developed by the security consultants Larry Pesce of the NWN Corporation in Waltham, Mass., and Ben Jackson of Mayhemic Labs in Boston, uses a more direct approach to warning about the potential dangers of geotags. The site displays a real-time stream of geotagged photos posted on Twitter; the person who posted the photo also gets a notification via Twitter. 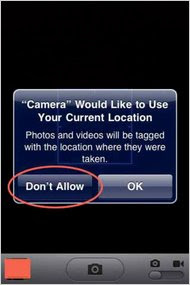 So don't forget to turn off your locator status on your iPhone!
Posted by Palmoni at 9:33 AM