Disney on Deck with earnings 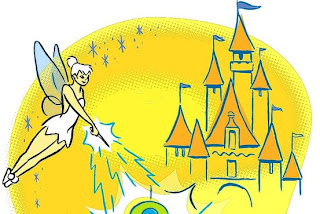 Nice story in the WSJ on Disney, which reports on Tuesday.

When Walt Disney Co. reports quarterly financial results on Tuesday, all eyes will be on its movie studio.

The April to June period included a sizable chunk of monster box-office take for "Alice in Wonderland" and, thanks to an early home-video release, the first month of DVD and Blu-ray sales. On top of that, "Toy Story 3" took in $258 million domestically in June and went on to become the Pixar unit's second biggest-grossing title ever, behind "Finding Nemo."

"Iron Man 2," released in May, represented another big win for Disney, which bought the studio behind the superhero sequel, Marvel Entertainment, at the end of last year. Though the film was distributed by rival Paramount Pictures, a unit of Viacom Inc., that studio collected just an 8% distribution fee, after recouping expenses. That means a big chunk of the film's $621 million world-wide box-office gross flowed directly into Mouse House coffers, adding relative strength to the results.

Disney's toy and apparel division got a nice boost from Buzz Lightyear and Woody dolls, thanks to "Toy Story." Though Disney Consumer Products also now has the North American merchandising rights to "Iron Man" and other Marvel franchises, it's unclear whether that will translate to Disney's bottom line this quarter, since the toys were largely designed and manufactured before the December takeover of Marvel.

Meanwhile, at its theme parks, Disney has been gradually dialing back the discounts they used to maintain attendance levels through the economic downturn. That could boost revenue per customer, though given the hit it likely delivered to attendance levels, the effects on revenue and income remain to be seen.

Disney is sticking to its guns on pricing. Last week, the company announced increases in admission prices at its theme parks, something it does some time in midsummer most years. For instance, at Disney World, the cost of a single-day admission ticket will go up 8.9% for children and 3.9% for adults. In 2009, when prices went up about 5%.

But the chart still needs some work!
Posted by Palmoni at 8:49 AM