30,000 show up for subsidized housing in Atlanta 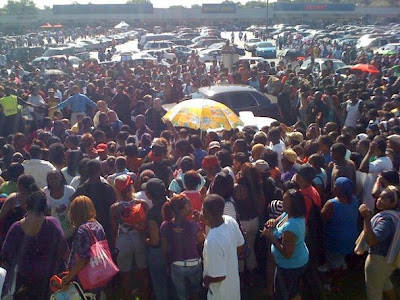 Thirty thousand people showed up to receive Section 8 housing applications in East Point Wednesday, suffering through hours in the hot sun, angry flare-ups in the crowd and lots of frustration and confusion for a chance to receive a government-subsidized apartment.

The massive event sometimes descended into a chaotic mob scene filled with anger and impatience. Some 62 people needed medical attention and 20 of them were transported to a hospital, authorities said. A baby went into a seizure in the heat and was stabilized at a hospital. People were removed on stretchers and when a throng of people who had been waiting hours in a line were told to move to another line, people started pushing, shoving and cursing, witnesses said.
Posted by Palmoni at 8:17 PM