The "Inverted Jenny" and the One cent Blue 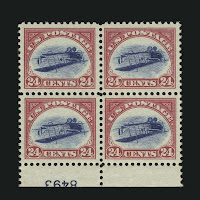 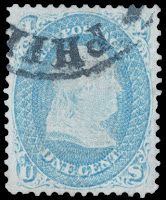 One of the most famous stamps in the world is the inverted Jenny, and Bill Gross of PIMCO, owned this magnificent plate block. Bill, however, needed this 1 cent Blue Franklin, with a "Z" grill on the back, to complete his collection.

The "Z" grill on the stamp was impressed upon it, to prevent the stamp from being re-used. During the civil war, coins were hoarded, and stamps could be used as currency to stimulate the economy. Wash out the cancellation mark on a used stamp, and now you have legal tender! The grill was used to prevent the public from having a printing press!

So Bill swapped stamps. Only one "Z" grill existed for collectors. So Bill Gross swapped his Jenny for the Franklin----the $4 million dollar trade that sent the stamp world buzzing!

2009 is a similar demarcation point because it represents the beginning of government policy counterpunching, a period when the public with government as its proxy decided that private market, laissez-faire, free market capitalism was history and that a “private/public” partnership yet to gestate and evolve would be the model for years to come. If one had any doubts, a quick, even cursory summary of President Obama’s comments announcing Chrysler’s bankruptcy filing would suffice. “I stand with Chrysler’s employees and their families and communities. I stand with millions of Americans who want to buy Chrysler cars (sic). I do not stand…with a group of investment firms and hedge funds who decided to hold out for the prospect of an unjustified taxpayer-funded bailout.” If the cannons fired at Ft. Sumter marked the beginning of the war against the Union, then clearly these words marked the beginning of a war against publically perceived financial terror.

How does one invest during such a transition? Investors should recognize that this grassroots trend signals – most importantly – an increasing uncertainty of cash flows from financial assets. Not only will redistribution and reregulation lead to slower economic growth, but the financial flows from it will be haircutted and “burden shared” by stakeholders. In turn, the present value of those flows should reflect an increasing risk premium and a diminishing multiple of annual receipts. PIMCO’s Paul McCulley, famous for a catchy phrase or a light-bulb-generating truism, asked a group of clients the other day to compare FedEx and UPS to the U.S. Post Office, if it were a public corporation. “Which one would you pay more for?” he asked. If FedEx deserves a P/E of 12, wouldn’t the value of the Post Office be substantially less?
http://www.pimco.com/LeftNav/Featured+Market+Commentary/IO/2009/IO+May+09+Gross+2+2+4.htm

What Bill Gross is missing, is that America is not made up of Wall Street executives, and bond vigilantes, who only want the power of the printing press to be in their hands and bankruptcies predicted by Z-scores! After all, who else besides PIMCO and Goldman Sachs gets to trade on the Fed's information?

The rich and powerful talk about a level playing field, but they don't even want to play in that sandbox.

And now that bond prices are not cooperating with their positions, they want the economy to take on more sand.

But now the people know the difference! The economy isn't going to hell, and his latest Outlook's worry, will last as long as the worry did about China not buying our Treasuries in the sand post!

Now the only ones drinking sand are the naysayers!

Instead of taking the advice of the seller of the inverted Jenny, you'd be better off calling Tommy TuTone's Jenny at 867-5309 and getting advice from her!

"In the day of my trouble, I will call upon thee, for thou wilt answer me."

Because then you'd have to figure out what the 5309 meant!

And that's too much for Wall Street to handle.

Even if you make them money!