The bears futile attempt to re-assert themselves 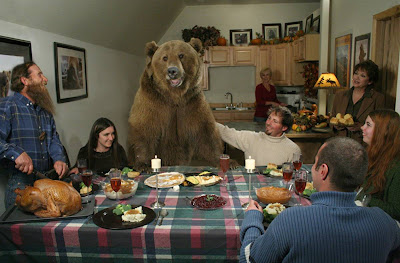 Who would want to eat dinner with the bears anyway? I'm sure you would think the image above is photoshopped.

How about a video?

How about National Geographic? Here's the story with some more pictures. He even hangs out with him in the jacuzzi!
http://www.dailymail.co.uk/news/worldnews/article-1174259/Meet-Brutus-800lb-grizzly-bear-likes-eat-meals-dinner-table.html

That my friends, is the real bear. The bear on Wall Street is of the photo shop variety!

And they were out in force today. Selling technology, selling the financials, and trying to hit the material stocks, until Wall Street realized that this bear had no teeth. It couldn't even be a circus bear!

They just wanted to growl, show some teeth, and pretend they were real!

Give me a break.

Come on, they could attack, because some of the secondaries were just done at outrageous prices. Heck, I even scalped COF for a decent short today, but that was their playbook. Break the print on the secondary, and maybe the world will collapse again!

But it's just Wall Street fiction.

That's Wall Street's version of Jack Nicholson--"The easiest way to get over a girl, is to get under someone else!"

And that's all today was.

This idea that we are going to roll over here is just stupid.

It's as stupid as the stupid selling that was going on by these bears with no teeth.

The selling was so pathetic, it even makes me want to buy Black & Decker (BDK 32.37). Seven days ago the stock was 41. How much of a pullback do you need? After all, Meredith Whitney told us yesterday that retail was the best short on the market. So let me buy something in retail!

So I'll buy a beater from Black & Decker, and use that to fend off the hapless bears.

Love the blog. You've been bang on being bullish.
But don't you think the 200 day avg will repel the first run at it and cause at least a 2-3 week, 7-9pct pullback?
It often works like that, after a strong run up.

hi, today had a chance to be a big bear day but greenspans message brought everything back up.

where are you gathering info to come up with your 4% gdp growth in the 3rd qtr?

No, because then we would get the pullback that would allow those who missed the run from 830 a chance to get in.

The whole world would love the pullback. Instead, we'll get these massive rotations.

So we shojld make use of varios techniques to improve generation efficiency,
takinbg measures like desulfurization and dust extraction,
and replacing coal with natural gas. Over the ong time, funny and romantic themes have been favorites for everyone around the globe.

For additional in-depth details about the Samsung Galaxy S2 White, you should
check out reviews.

Hello! This post could not be written any better! Reading
this post reminds me of my good old room mate!
He always kept chatting about this. I will forward this article
to him. Pretty sure he will have a good read. Thank you for sharing!