A word on Friday's close 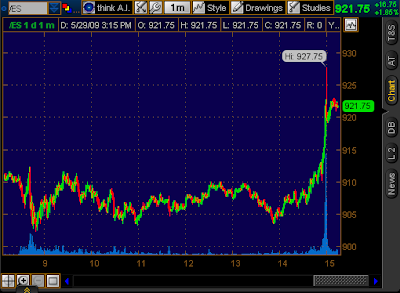 The bears just go crazy when we have these spikes into the close.

It's amazing how technical and in depth these bears get with their research, trying to defend a position that is just ass backwards.

Manipulation is just screamed by these folks.

"OMG--They printed a break-out on the charts! It's the Plunge Protection Team! It's Goldman Sachs. It's our Governmenet rigging the market. Manipulation! Where's the SEC?"

Oh please. Save it for someone who really cares.

And save the electronic ink for a story that's real.

The bear case isn't real. The market is. And people want in.

And the market isn't rolling over, as advertised here. In fact, it's heading toward new highs next year. But it's first going to 980, and then 1040. And that move will be quick. Just like the move from 830 to 930 was.

We are in a once in a generation bull market, and you think these numbers are going to stop it?

Come on, it will be like a hot knife through butter.

And it surely won't be a Fisher slog!

And Friday's story will soon be forgotten.

Just like people already are forgetting about Ms. Whitney's prognostications, while they watch Professor Roubini lose his credibility, and watch Whitney Tilson lose some book sales, and watch Peter Schiff's non existent new interviews, or James Simons rapidly depleting funds under management (now underperforming the S&P by 31%) or any other of these bears with their repeated gusts of folly, who somehow think the stock market is going to be correlated with their world viewpoint, despite the fact that these charlatans can't manipulate the markets with their views.

That's why the only ones who are so worked up about Friday's close are the bears.

The noose just got a little tighter!

Now why don't these bears think about the noose that is around portfolio managers that aren't yet invested in stocks. That are underperforming this market? Or are short?

How much pressure do you think is on them? How much sleep are they getting this weekend? How much tightness do they have on their chest?

Even the famed John Paulson was down in April, and he had massive gold exposure. Advantage Plus was down 5%. The Advantage fund was down 3.1%. We know that he picked up 100 million shares of BAC at 10 on the latest stock offering, so it's clear that even he is scrambling and shifting his portfolio. What else is happening to the other mere mortals in hedge fund land?

It's not a scramble, it's a custerf*ck!

Bill Gross is so stuck in mortgages that he couldn't even grasp that concept, even though there's a better than 40% chance of that happening. Why hasn't that been plugged into their variables? (And before you say that's ridiculous, just look at AAPL, GOOG and RIMM and their weighting in the index, and then look at next year's earnings estimates, and add 15% to them because the analysts are too bearish--and now we have 2011 numbers that will hit in 2010, and don't those earnings deserve a higher multiple?--So where do you think stocks are heading? And you want to say that Friday was a manipulation? It was just someone getting a head start on next week's action!)

And what will that do to those that are underinvested?

How tight will that noose then get?

And that's the new reality of this market.

Friday, was just a precursor of the things that are starting to come next.

And you can talk about the economy and housing and commercial real estate, and any other statistic you want, but it won't make you a red cent, or a thin dime on Wall Street.

Just like these same folks that come up with these supposedly intelligent and erudite arguments outlining the fraud committed by the "gangsters" on Wall Street who moved the markets a percent or two a couple of minutes before the close. (But boy, it was sure fine, when the "gangsters" could destroy companies and their stock prices. Where were these folks then? Weren't they thumping their chest? Now the only thing between their legs is a tail because they've been neutered!)

When all this move is, is capital being committed at the expense of the shorts pocketbook.

It's no fun being a "gangster" when the "gangster" looking over your books has an unlimited pocketbook, and a different agenda than these shortsellers.

And unlike the Cepheid type, they don't want the luminosity!
Posted by Palmoni at 7:02 AM

if people actually wanted in the Futures index would not be the one leading the cash. INDEX futures buying is not fundamental in nature. Enjoy it while you can, because the longer the market disregards fundamentals, the harder it will fall. Once again people that want to be in the market do not buy not caring about price. That type of buying is not real.

Ultimately stocks will be evaluated based on earnings. Unemployment growing, and GDP shrinking is not an environment in with earnings will grow. I'll be glad to dump the overvalued stocks that I didn't sell last fall. Pump on!

You miss the point. Buying the futures is the quickest way to deploy your cash. Later, when they have their committee meetings, they can figure out what stocks they can deploy the cash in.

That's when they care about price, and they bid for their stocks.

And when someone says that this future buying is not real, it shows your market bias. A priori, since the market is overvalued, who would buy at higher prices? You started with the wrong premise; thus you end up with the wrong conclusion.

How about those that need to commit their money, and they have just come to the conclusion that stock prices are cheap, and not dear? They don't buy, they lose their job.

They have just reached the conclusion quicker than the shorts.

Another statement that shows bias is that stocks are ultimately evaluated based on earnings. You don't recognize the future earnings growth, that the stock buyers of today do.

That's why you need to pump the bearish case.

They need stocks down.

So does everybody else that isn't in.

What you call a "pump" is just reality forecasted ahead of time.

On March 12, I said Wall Street would recognize this botton in three months. We're almost there.

Welcome to the jungle! It's the wrong environment for the bears.

They need the woods.

And they'll continually get taken out to the woodshed.

I think even you don't believe this market is going to the moon as tour article sugests.I think that by beeing so Bullish, you're trying to convince yourself.

Of course there is a disconnect with the market's strength, and the current state of the economy.

It is also a given that the bears arguments are much more cerebral than the bulls.

They still have some so called "current" data on their side.

But the biggest disconnect is between the bears and the bulls, and the future prospects of this economy.

And the bulls say the bears need to gauge the state of the economy six to nine months from now.

But I say we'll be seeing an improved economy in six weeks.

This 2011-12 double dip talk doesn't do anybody any good-especially when these same folks that talk about it can't stand another day up like we had Friday.

Hopefully you that are short, will learn what the chastened bulls did last year.

They have the story that you don't.

The melt up was anything but 'natural' and you know it.

Nothing about the markets is.

Never was. Or will be.

Be honest about it.

certainly like your web site but you need to take a look at the spelling on quite a few
of your posts. Several of them are rife with spelling issues and I
to find it very bothersome to tell the reality
then again I will certainly come again again.