WTF is with these acronyms? 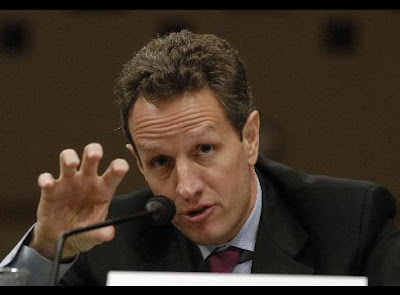 The whole world, except the ECB is racing to ZIRP-the Zero Interest Rate Policy. And their stock prices are also racing to ZIRP-Zero Is the Real Price.

Monday, we'll get a half baked plan by Geithner, that will give traders a chance who bought the Friday melt, a chance to hopefully sell them into Monday's lift. Still the only buyers in the banks, are the shorts that get run in, on another empty promise.

But none of this talk changes any of the reality that no one wants to face.

Obama said that in six weeks, the average family of four will now get an extra $65 a month.

And appropriately, they'll start getting this money on April Fool's day!

And now we are supposed to believe that this $65, and Geithner's cracking open of the TALF plan to buy bad assets will save the banks and turn this economy around! So these assets, which are deemed too risky for the government to buy, will now be bought by private speculators, who the government will backstop.

And if all these banks are going to ZIRP, who is backing all the credit default contracts and derivatives swaps between these insolvent institutions?

So since the FED, always comes up with an acronym for each of their ill-fated plans, let me come up with one for Geithner.

It's the WTFPL plan.

Or maybe, it's just this WTFPL!
http://en.wikipedia.org/wiki/WTFPL

At least that license is free!
Posted by Palmoni at 12:00 PM