Take another look at the banks 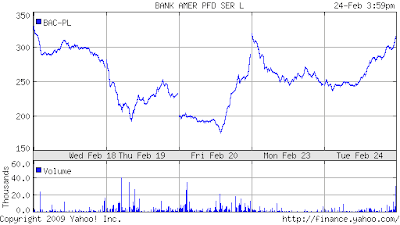 Tonite, the WSJ has another negative outlook on Bank of America

For example, among 17 issuers of securities backed by adjustable-rate jumbo mortgages, Bank of America's BAFC series has performed the worst, with payments on about 16% of the underlying loans 60 days or more overdue, according to a report from Walter Schmidt and other analysts at FTN Financial Capital Markets. FTN is a unit of First Horizon National Corp., a regional bank based in Memphis, Tenn.
http://online.wsj.com/article/SB123552887436966255.html?mod=yahoo_hs&ru=yahoo

Screw the articles! There is just too much money being made trading BAC common, and the preferred to worry about some of these mortgage holdings.

I know this doesn't get a lot of ink, but the Bank of America preferred Series L is a traders dream! It was under $200 Friday, and closed at 315 today!

You get huge swings in this number.

Now BAC common trades 500 million shares a day, and obviously the preferred is senior to the stub, but when you get get the juice out of these numbers like they've been giving the last few days, it engenders confidence in the stocks.

And the moves are easy to trade. USB gives plenty of action also. They are all worth a shot at these levels.

And the trading is easy. Heck even Citi was up over 20% today. Even though Citi wouldn't know a $27 million Nigerian scam from email spam!
http://www.businessinsider.com/citigroup-caught-up-in-nigerian-email-scam-2009-2

The point is, traders will gravitate to where they can make money, and money provides liquidity. And now trading the bank stocks isn't just a one way ticket to hell.

And yes, the banks are "insolvent" on a bookkeeping level but that doesn't matter. The slashed dividends are partially paying for their toxic assets, and there is a value to the income streams that these assets generate.

Easy money trading attracts attracts more flies than honey, and it looks like some of the shorts are getting nervous, because like the toxic assets on the banks balance sheets that we can't see, we don't know how many funds are shorting these numbers with naked shares trying to drive them into oblivion!

And since we can't see either of their books, I think from a trading perspective, at these prices, the large short positions offset the toxic assets. Especially because we'll soon get some white-washed explanation that these banks balance sheets have now been "stress tested!"

Look at the verbiage they use. When we take a stress test, it actually means something. These bankers hearts are so dark, they wouldn't tell us the truth if it killed them. So how is it possible that these banks can't pass the stress test? Heck, even Bernanke said it wouldn't be "pass" or "fail!" The only stress test will be to the taxpayer. He's the one that is going to come up with the cash!

But look at the news the last few days. Rick Santelli does a rant on CNBC and the White House calls him out on it. Today a senator asks Bernanke a pointed question, and Dodd cautions him about affecting confidence! Pretty soon the media will be called out for talking about the "unprecedented" conditions in our economy! Heck, did anyone see the latest issue of Euromoney? A Goldman chief investment officer said that "unprecedented" was used in 4,000 research reports, which they found "unprecedented!"

But look at Goldman's earnings report on December 16:

These results were adversely impacted by unprecedented weakness across the broader credit markets, reflecting broad-based declines in asset values, substantially reduced levels of liquidity and dislocation between prices for cash instruments and the related derivative contracts and between credit indices and the underlying single names.
http://finance.yahoo.com/news/Goldman-Sachs-Reports-bw-13841883.html

But did you see the action in Goldman Sachs today. It was up 13! That was unprecedented!

Bu that's what happens when you have a scarcity of financial stocks that you can commit money to.

But back to Bernanke. Whatever you want to say about Bernanke, today he was finally good. We of course, can pick apart his testimony, and say that we know what he says isn't going to happen, but who is going to check in on him?

Congress? Did anyone catch the looks on some of our "best and brightest" in the corridors of power?

Do you think that these folks will be able to police these bankers?

So we have to play the hand we are dealt with. We trade them!

Traders will short stocks until they can't make money shorting them anymore. Then they'll go long that what they were shorting.

It was the same with oil. When it was going up, every trader was smugly telling us about peak oil, but when it reversed, the traders just bet with oil down.

They look ready to turn.

Unless of course, Timmy Geithner screws up tomorrow!

But then again, traders will just buy the pullback!
Posted by Palmoni at 12:58 AM