Citi's cramdown of the taxpayer 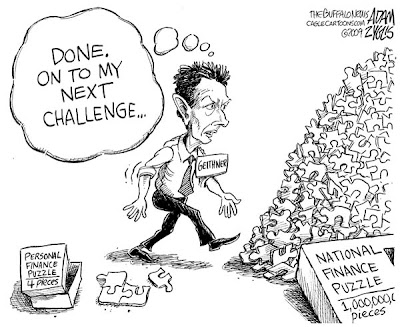 You, the taxpayer had a $25 billion preferred piece in Citigroup, that was paying you a couple billion a year of interest.

Your investment lost 54% of it's value today, at Citi's benefit. And you, the taxpayer, lost the $5,555,555 a day in interest that Citi was supposed to pay you.

It's your gift to Citi!

And to top this off, you lost $13.5 billion dollars in the conversion!

And once again, the taxpayer and the common shareholder of Citi get hosed!

So the bank lobbyists have now lobbied together, and have now persuaded our representatives in Congress that mortgage cramdowns in bankruptcy are now out of the question.

But Citi found it perfectly reasonable to cram down your investment in them!

But once again, these bankers don't know the collateral damage that it going to hit them again. Remember a few years back, when these bank and credit card lobbyists made it more difficult for John Q. Public to get their debts discharged in bankruptcy?

So John Q. Public just transferred their debt to HELOC's and cash out financing, which now sit on the banks balance sheet as toxic assets, and now, you are buying these assets back from the bank, with sham preferred conversions into common, that these geniuses from Treasury put together.

Now since the court system won't allow cramdowns into bankruptcy, these banks are now going to face cramdowns from the sophisticated white collar worker that has lost his or her job.

See it was easy for these bankers to steamroll the sub-prime borrower, and the marginal buyer that lost his home, but now they will face another hurdle.

In JP Morgan's investment presentation yesterday, we saw that the largest increase in sour mortgages were coming from those that were rated prime. Those that want to game the system, will now be a harder adversary for these bankers. They'll stay in the home, and use good lawyering techniques to do it. Heck, they may even ask for proof from these bankers that they own the securitized mortgage that they are trying to foreclose on!

A cramdown, would of forced many of these into bankruptcy in order to modify the mortgage. Now they'll have people that will play hardball with the banks.

But these same bankers think these high FICO scoring individuals will go away peaceably.

No, but they'll do it with pit bull lawyers. Bernie Madoff, made off with billions and billions of investors money, yet he still parks his ass in his gilded apartment, because he had a good lawyer. What happens when a banker wants to kick out a decent homeowner to the street because he lost his job? Does anybody think these displaced white collar workers can't find a good lawyer and find a judge up for re-election that understands that the most hated class of worker in America is an overpaid banker that steals taxpayer money?

Now we'll have the collateral damage of folks walking away from their mortgage but staying in their house. And some of them will win, and they'll live in their house for free.

And then these same bankers will be writing down their prime mortgages!

It's the collateral damage cramdown!
Posted by Palmoni at 6:11 PM