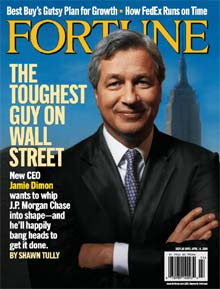 Last week, we heard Lloyd Blankfein of Goldman Sachs tell the street his fantasy. He was looking to pay back the $10 billion he got from the TARP.

How? Is he going to get Warren Buffett to buy some more preferreds? Will Goldman raise some capital in some hedge funds side pocket? We know Stanford group can't lend any money to Goldman! And we also know, that some of Goldman's partners need money. They have margin calls!
http://uk.reuters.com/article/companyNewsMolt/idUKTRE51H6BN20090218

Too bad they didn't use Lloyd's pump to reposition their Goldman stock!

These masters of the universe used their Goldman stock as collateral to invest in some of Goldman's hedge funds and those returns are suffering. (A cynic might say that Goldman's returns are down, because they don't have as many hedge funds that they can now front run. But I digress.)

Now today, we heard that Jamie Dimon, "the toughest guy on Wall Street" tell the street his fantasy. He wants to pay back the $25 billion of TARP money. We heard Ken Lewis of Bank of America say he'd like to pay back the TARP money too, but does anybody buy that?
http://www.bloomberg.com/apps/news?pid=20601087&refer=home&sid=aP6xr9LsyklY

Here was Jamie Dimon's fantasy, and apparently, he hatched it while he was being grilled by Congress:

"While I was sitting there I was thinking 'I should raise my hand and say 'I will wire you back the (TARP) money if you let me leave right now.'"

So wire it back then!

After all, didn't Barney Frank say, "If you want to give back the money we will take it, and if there are obstacles we will undo those obstacles."

Dimon's fantasy is as ludicrous, as the lyrics of Ludacris' song, "What's your Fantasy."

I just don't want to hear either of them!

But maybe Barney Frank can just sing to Jamie Dimon the chorus.