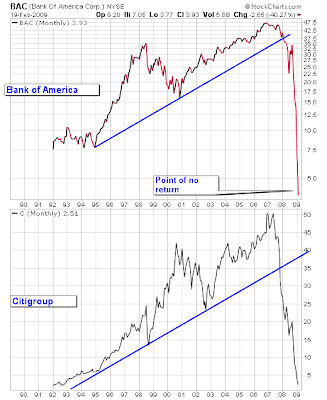 And why shouldn't it? From lay-offs at Disney to automobile workers, the job cutting is everywhere. And the next area of cutting will be in the sacrosanct areas that no-one ever cuts. State jobs, and teachers.

Look at California with their budget crisis. Furloughing workers, cutting pay, and downsizing. Did these people think they had job security?

How about Florida? The state budget gap is already $7 billion. And only $2.5 billion of the stimulus money is available this year. Do you think Florida is going to start making cuts?
http://www.ocala.com/article/20090212/ARTICLES/902121004

We have counties in Florida that are already voting to close sixteen schools. What do you think the consequences of some of these closings will be on consumer confidence? Wasn't one of the perks of teaching job security?

The revenues to the states are collapsing. How is this revenue going to be made up? By cutting services.

But let's look at the library, where they haven't cut back the services, because everyone is now going there. Even in the tonier towns in South Florida, you have places where library visitors are up 50% from last year. Does that mean anything to Wall Street? It does to Hollywood. Let's look at the lonely DVD.

It used to be that every Tuesday, people would buy the latest DVD. Then that stopped. Then they used to rent them at Blockbuster. Then that stopped. The only thing you can get from Blockbuster for a dollar is their stock, and then you get a quarter of change back! The higher end consumer then went to Netflix, and the middle class gravitated to the $1 rental cube at the neighborhood Publix or supermarket. Why else is Coinstar buying DVD kiosk company RedBox for $170 million? It's because a lot of people are renting DVD's for a buck.
http://www.dmwmedia.com/news/2009/02/13/coinstar-buys-rest-dvd-kiosk-firm-redbox-$176m

And they are renting them for a buck, or getting on the waiting list at the local library for the same. That is the trade down in DVD's, just like we have seen the trade down to the dollar stores, but it happens under the surface of Wall Street. But does anybody think these consumers are confident? Especially when you now get on a waiting list for a DVD at the local library because nobody has or wants to spend any money?

Yesterday we found out that Mario Cuomo had subpoenaed Bank of America CEO Ken Lewis, about Merrill Lynch bonuses. He told his bank executives that Washington had assurred him that the "nationalization" of Bank of America was not on the table.

Let's use different terms. How about the "zombiefication" of Bank of America?

Or maybe this story-with the charts!

Gone in 60 Days: Citi and Bank of America Won’t Live to See May

If there’s one thing our readers know, it’s that ChartingStocks.net has made some bold calls in the past which seemed controversial and highly unlikely at the time. Our January 2007 post warned of the coming stock market crash at a time when the market was making new all time highs. In February 2007 we warned about the breakdown of the brokerage stocks and singled out Bear Stearns (Trading at $160), Merrill Lynch (Trading at $87), and Morgan Stanley (Trading at 78). In September 2007, we warned of a selloff in the coming weeks. The market peak and decline began 4 weeks later.

We’re going to make another bold prediction. Bank of America and Citigroup won’t live to see May. The two banks will be nationalized in the coming weeks, and we think that the announcement can come as soon as tomorrow evening (Friday evenings are when major bank announcements and failures occur)...

We play close attention to air time given to so-called “Experts” and the way the media spins the information. If you know that our mainstream media is simply a licensed PR firm for the US government, you can get vital information which you can use in trading. Always ask yourself - What opinion are they trying to insert? What are they selling? What’s the underlying agenda?

The government uses the media to float policy before the public so it can digest it. By the time the government takes the action, most people not only anticipate it but are even asking for it.

In the past two weeks there have been countless debates, op-ed’s, and even opinion polls regarding bank nationalization. The popular opinion among the establishments “Experts” is that nationalizing the banks may be the only way. Even Alan Greenspan, a LIBERTARIAN, recently said that it would be a good idea. It’s coming folks! It’s what the establishment wants. (Sidenote: They may not actually use the word nationalization, even if thats exactly what they do)
http://www.chartingstocks.net/2009/02/gone-in-60-days-citi-and-bank-of-america-wont-live-to-see-may/
Posted by Palmoni at 6:27 AM