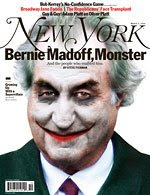 A little more than a year before he blithely confessed to masterminding the largest Ponzi scheme in history, Bernie Madoff attended the wedding of his niece. That Saturday evening, September 29, 2007, Shana Madoff, the daughter of his younger brother, Peter, his partner for almost four decades at Bernard L. Madoff Investment Securities, married a former official at the Securities and Exchange Commission, an irony that Bernie couldn’t quite keep to himself. He tossed an arm around the neck of one young guest and directed the young man’s attention across the dance floor, toward a clean-cut group sipping cocktails. “See them,” Madoff said, pale-blue eyes flashing incongruously in his kindly face. “That’s the enemy.”

..Madoff, though, kept his own mess, his own monstrousness, hidden away. His operation was relentlessly predatory, systematically looting charities, longtime friends, family, as well as investors spread around the globe. And yet it seems unlikely that he was a sociopath in the classic sense, someone indifferent to the feelings of those around him. In daily life, he wasn’t callous or cruel. Just the opposite. He valued people’s good opinion and wanted to impress. He didn’t simply treat people as means to an end. He was a great boss. He took care of his employees as if they were family and, until the end, of his investors, too. “Everybody relied on Bernie,” says one longtime investor. “He was one thing you thought you could count on. And he enjoyed being counted on.”
http://nymag.com/news/businessfinance/54703/

Bernie's Academy Award! When's the screenplay?
Posted by Palmoni at 10:57 AM