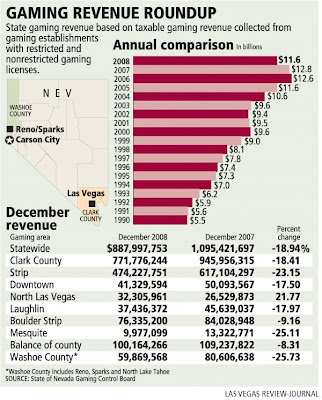 The year 2008 was the worst on record for declining gaming revenues in Nevada, falling nearly 10 percent for the year -- and a whopping 18.9 percent just in the fourth quarter.
http://www.lvrj.com/news/39483742.html

The Las Vegas mayor, Oscar Goodman wants Obama to apoligize, for the villification Las Vegas has taken as the corportae trips their are labled "junkets." He has even sent Obama a letter.
http://www2.lasvegasnow.com/docs/0209%20President%20Obama.pdf

When you have 9.1% unemployment and going higher, everyone gets testy.

Especially if you have an economy's business funded by debt.
Posted by Palmoni at 7:57 AM