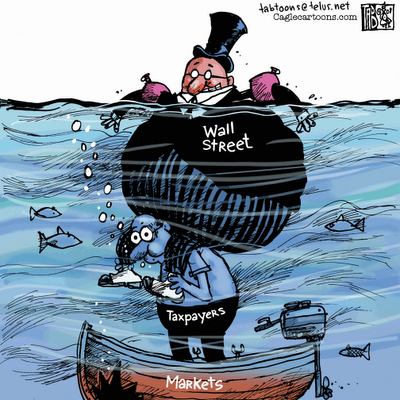 Dodd said we might have to nationalize some banks for a short time:

Senate Banking Committee Chairman Christopher Dodd said yesterday some banks may have to be taken over for “a short time,” and his House counterpart, Financial Services Committee Chairman Barney Frank, along with Republican Senator Jon Kyl rejected having the government step in to run banks.

And then he says that the banks won't have to obey the executive compensation restrictions:

Dodd, a Connecticut Democrat, also said Treasury Secretary Timothy Geithner has “an awful lot of leeway” in interpreting how the executive compensation restrictions he wrote into the economic stimulus legislation will be applied for banks that take federal aid.

Dodd’s statement gives Geithner the flexibility to say the rules don’t apply to firms that participate in the public-private partnership Treasury announced Feb. 10 to buy banks’ toxic assets, but only to companies that get cash injections under the Troubled Asset Relief Program.
http://www.bloomberg.com/apps/news?pid=20601087&sid=aR6hS.HsqHc4&refer=home

Just put more tab on the taxpayer's back!