More on "gaming" the USO 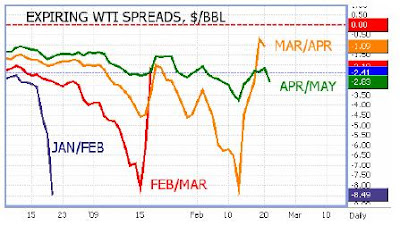 The Oil ETF's and double short ETF's are designed just to take investors money.
http://aaronandmoses.blogspot.com/2009/02/oil-play-for-oil-bulls.html
Last week, you got the "reader's digest" version of how traders game the USO.
http://aaronandmoses.blogspot.com/2009/02/oil-etfs-distirting-oil-pricing.html
Here's an in-depth great read on the same product:
Olivier Jakob at Petromatrix continues his crusade against the United States Oil Fund in his Tuesday note, an issue increasingly being picked up across the commodities and investment spectrum.

Jakob’s specific case is with the distortions being caused in the WTI market on account of the ETF’s size and predictability. He notes people are already rolling positions from the front-month April contract and into May just to avoid the distortions. This is making the front-month contract somewhat of a farce, with a number of oil traders telling FT Alphaville the contract’s viability as a hedging instrument is truly in question. The volatility, meanwhile, is also immense relative to any other contracts further down the curve.
Consequently, Jakob calls it a USO free-lunch:

Open Interest data for Friday is confirming that positions are already being rolled into May. This is unusual to have positions being rolled so early before the next expiry but the USO has created a different crude oil market. The front timespread on WTI (Apr/May) is logically starting to weaken as length is taken out of April WTI and as traders start to position themselves for the USO free lunch. This in turn is making for a wider Brent premium to WTI and an improvement of the product crack. If Petrologistics is right on the level of compliance then given that WTI will remain for a while distorted on the USO rolls, this could make for an even wider prompt premium of Brent versus WTI and a strong rebound of US Gulf cash physical values during the roll of indices.

Of note too, is the fact the industry happily front-runs the fund’s roll every month, presumably making a tidy profit from the distortations. Because of the nature of the contango, the ETF is also taking a loss on its NAV every time it rolls, leading to substantial underperformance versus the WTI contract which it is supposed to be tracking. On Monday, for example, closed at a value of $23.32 per unit. That’s significantly below the Nymex WTI settlement of $38.44 on Monday. Returns for anyone invested in USO ETF units have therefore been dismal, and yet the fund community would have everyone believe a mass of investment demand, presumably from retail investors who know no better (because surely a professional would see the problem), is what is forcing the fund to issue increasingly more units, taking up ever more WTI contracts as it does.
http://ftalphaville.ft.com/blog/2009/02/24/52836/the-united-states-oil-fund-mystery/