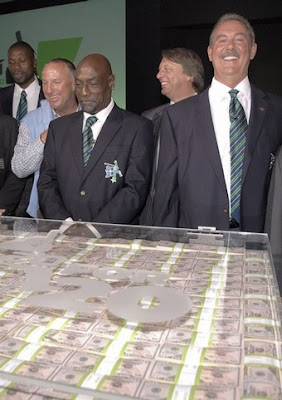 Authorities tell ABC News that as part of the investigation, which has been ongoing since last year, Mexican authorities detained one of Stanford's private planes. According to officials, checks found inside the plane were believed to be connected to the Gulf cartel, reputed to be Mexico's most violent gang. Authorities say Stanford could potentially face criminal charges of money laundering and bribery of foreign officials.
http://www.businessinsider.com/shocker-stanford-under-federal-drug-investigation-2009-2

Banco Santander is making the Russian Ogliarchs that invested in Madoff whole, so it is apparent that these ponzi schemes attract the dirtiest of money.

Why would it be any different with Standford Group?

Unless you just assume the $3 billion of money invested with him from Venezuela was just lilly white!

Venezuelans may have between $2.3 billion and $3 billion deposited with Antigua-based Stanford International Bank Ltd., whose owner is accused of fraud in the U.S., banking regulator Edgar Hernandez Behrens said.
http://www.bloomberg.com/apps/news?pid=20601086&sid=a8UOfU7oHSWk&refer=news
Posted by Palmoni at 10:24 PM