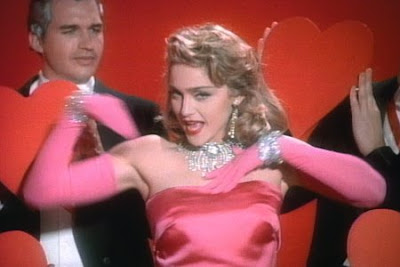 Today was Day 1 of the material ramp! And CNBS even had the audacity to tout the burgeoning new bull market in the material stocks. Why else do you think I have been touting them?

after touting them here last week, advertising a 700% move on the options on the material ETF.
http://aaronandmoses.blogspot.com/2009/04/buy-materials-if-you-want-700.html

That 700% is a lock! So I needed to tout it twice, and now three times, just so I can advertise it a few more times after it happens!

And I have to put Madonna's song for an inspiration, because that's the closest most readers will come to appreciating the philosophical bent of this blog!

And since Madonna is known for her "regret" for recording "The Material Girl" because it became her nickname, so will most people regret not playing the material stocks or the 700% play!

After all, wasn't Franco Harris' immaculate reception the greatest play in NFL history and also the most controversial??

The best plays, are always the most controversial!

After this, the bull market, will no longer be a question of belief, but a doctrine of fact!
Posted by Palmoni at 8:23 PM