Whitney Tilson on the housing "mirage" 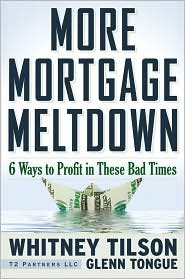 The real mirage, though is with sales of Whitney's latest book, More Mortgage Meltdown: 6 Ways to Profit in These Bad Times over on Amazon.

The sales rank this week is 1,297. Last week it was 300. Which means that despite showing up on CNBC to tout his book, and releasing various bearish articles, weekly book sales on Amazon have dropped from about 200 a week to 50.

I suppose when he's down to selling 5 a week, he'll get bullish.

Which will be by the next Government holiday after the 4th!

But they say, that there's no such thing as bad publicity, so here's the cover of his book while it's available.

Get it, and brag to your friends that you got the latest read in fiction.
Posted by Palmoni at 7:35 PM