They were drinking in Bethpage.... 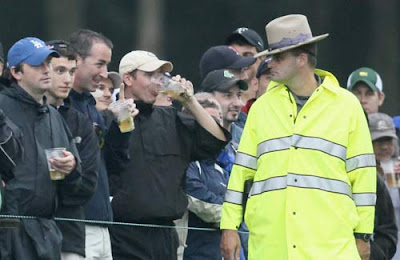 Beer-sodden fans and rain combined for an ugly finish to a long day of golf yesterday, with Tiger Woods and other golfers subjected to drunken heckling as the action at Bethpage Black came to a close.

At 6:42 p.m., dozens of drunken spectators at Hole 10 taunted Woods as he prepared to start his third round in the rain.

"We're on Long Island, baby, where men are men!" one fan yelled. "Put that umbrella down!"

The taunts were mixed with cheers from the majority of the crowd.

Woods did not respond to the people who were heckling him but tried to quiet the crowd with a "sshh" hand gesture, putting his finger to his lips, as golfers prepared to tee off on the adjacent 12th tee.

"Suck it up, you've got your own video game!" someone shouted at Woods.
Posted by Palmoni at 9:54 PM