The Snatch of the Virgin 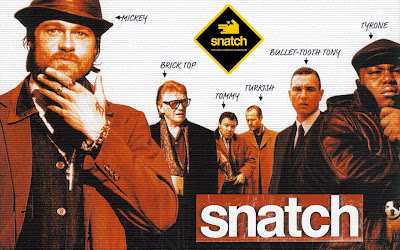 Brick Top: In the quiet words of the Virgin Mary... come again?

One of the greatest snatches of all time, was the theft of the Mona Lisa, in 1911. The NY Times reported:

LA GIOCONDA IS STOLEN IN PARIS
MASTERPIECE OF LEONARDO DA VINCI
VANISHES FROM THE LOUVRE
The story of the theft of the Mona Lisa by Vincenzo Peruggia was always unsatisfying. In 1932, a Washington Post writer, Karl Decker, came up with a more embellished version. The LA Times said, "it is a fine romantic tale, which ought to be true if it isn't."

So now for another, romantic version of truth.

Is the Mona Lisa, actually Da Vinci's idealization of the Virgin Mary with child? Isn't it something inside that draws you to her? Unless you feel it's just her outward adornment that draws us passionately toward her!

You can compare St. Anne with Virgin and Child with the Mona Lisa, and you can see the same mysterious landscape. Why this background for a portrait? Da Vinci kept this supposedly "commissioned" portrait of Lisa Gherardini/Giacondo for himself--the portrait whose adornment is her eyes and smile with her own secret to tell. Wouldn't a portrait really be something like this? So in the vain of the DaVinci Code, where is the other version of the Mona Lisa, just like the Virgin of the Rocks? Or did he idealize the painting to represent something else? In St. John the Baptist you see the same techniques of chiaroscuro and sfumato as used by Da Vinci in The Mona Lisa. 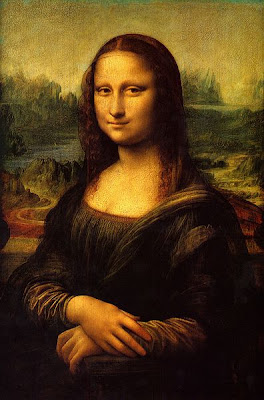 The most luminous point of the Mona Lisa is it's heart, and it's also the center of the composition. The thin brush strokes don't even show up on X-rays. The building up of thin layers of paint, gives it it's luminescence.

She was painted on poplar wood; some say that was one the woods of the cross, to the Greeks, poplar was a funeral tree, and it is still used in Jewish caskets today.

The first miracle of Christ, was the changing of the water into wine at The Wedding Feast of Cana. Didn't Mary say to him, "They have no wine?" At the Louvre, The Mona Lisa faced this painting. The painting on one side of the Mona Lisa was Correggio's Mystical Marriage.

Biblical theology, represents the relationship of the believers to God as the "mystical marriage."

On her other side, was Titian's Allegory of Alfonso d'Avalos. This was the painting of Marquis del Vasto going to battle, leaving his wife Mary; she being comforted by Victory, Love and Hymen. The painting used to be known as, "An Allegory, Perhaps of Marriage, with Vesta and Hymen as Protectors and Advisers of the Union of Venus and Mars."

An Allegory, Perhaps of marriage? With Vesta, the virgin goddess, and Hymen, the protector?

She smiles at her placement in the Louvre.

But isn't the Mona Lisa really the Madonna? Mona is just a misspelling of "monna" the contraction of Madonna (mia donna), but as with all things significant, fate plays its hand in mysterious ways. After all, wasn't Oprah, just a miss-spelling of Orpah, from the book of Ruth? Ah the strange hand of fate.

Is there any other object, in any museum, that has the fascination of the Mona Lisa? Why is she the best-known painting in the world? They tell us it's "because there is something inside that painting that speaks to us all." What could speak to you, hundreds of years after it's conception? A secret smile must hide a wonderful secret?

In 1997, the curator of the museum, was "astonished at the exceptional state of the painting, which never seems to deteriorate or grow old, because the wood is in perfect state, which is very unusual for an Old Master."

Does a wonderful secret ever grow old?

So we go to Snatch, not because the producer's wife, was Madonna, but because of the script's dialogue. She may have known Snatch, but she didn't quite know the Virgin!

Listen. Are you busy? I'll tell you the whole story.
...The Septuagint scholars mistranslated the Hebrew word for "young woman"...
... into the Greek word for "virgin".
It was an easy mistake to make..because there was only a subtle difference in the spelling.
So, they came up with a prophecy:
"Behold, the virgin shall conceive and bear us a son."
You understand? It was "virgin" that caught people's attention.
It's not everyday a virgin conceives and bears a son.
But leave that for a couple of hundred years to stew...
... and next thing you know you have the Holy Catholic Church.
Oy vay, "what are you saying?"
I'm saying, just because it's written...
... doesn't make it so.
Gives them hope. It's not important whether it's fact or fiction.
- People like to believe.

I guess with that interpretation, they would never be able to answer Vinny's question--"Jesus, where did you come from?" They didn't drink the wine!

It's fortunate, however, that art historians won't come to these conclusions.

Otherwise the theft of The Mona Lisa, would be known as the Snatch of the Virgin!

footnote:
Sometimes you write a story, and, only one person is really supposed to understand what it means, because after all, wasn't Father's Day for Mary complicated? And since she who could understand, would quote Yeats to me, (when e.e. cummings was found wanting) I'll end by quoting Yeats quoting Pater's passage on the Mona Lisa, memoralized in the Oxford Book of Modern Verse

She is older than the rocks among which she sits;
Like the vampire,
She has been dead many times,
And learned the secrets of the grave;
And has been a diver in deep seas,
And keeps their fallen day about her;
And trafficked for strange webs with Eastern merchants;
And, as Leda,
Was the mother of Helen of Troy,
And, as Saint Anne,
Was the mother of Mary;
And all this has been to her but as the sound of lyres and
….flutes,
And lives
Only in the delicacy
With which it has moulded the changing lineaments,
And tinged the eyelids and the hands.

And doesn't Alphonse Mucha end Le Pater, with this?

An impressive share! I have just forwarded this onto a colleague who was doing a little research
on this. And he actually ordered me breakfast because I discovered it for him.
.. lol. So let me reword this.... Thank YOU for the
meal!! But yeah, thanks for spending time to discuss this matter here on your internet site.

It's a shame you don't have a donate button! I'd most certainly donate to this superb blog! I suppose for now i'll settle
for bookmarking and adding your RSS feed to my Google account.
I look forward to new updates and will share this site with my Facebook group.
Chat soon!

Here is my site: soundspace.paprikart.fr

My spouse and I stumbled over here different page and thought I might
check things out. I like what I see so i am just following you.
Look forward to looking into your web page yet again.

Howdy! This post could not be written much better!
Reading through this article reminds me of my previous roommate!
He constantly kept talking about this. I most certainly will forward this post to him.
Fairly certain he'll have a very good read. Many thanks for sharing!

Here is my web page rideanything.com

Hello colleagues, nice article and fastidious urging commented at
this place, I am really enjoying by these.