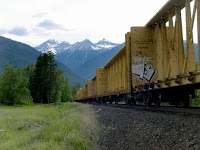 Did anyone listen to this report by NPR, while driving to work back in December? Oil was then at $39.90. The reporter talked about oil's contango, and all the storage of oil on tankers, yet they still surmised that it would take 18-24 months for oil to go to $60-70.

How long did that take? Tankers and electronic markets move commodities faster than markets expect.

Back in December, which was cheaper, WTI or Brent? And by how much? Wasn't it $4? Now which is cheaper?

And now Goldman says that oil is going to $85 by year end? Sold to you!

David Stein, for one, said mustard-yellow centerbeam lumber cars along tracks owned by the Wallowa Union Railroad have spoiled his view of mountains, meadows and pine forests from his home outside Enterprise.

The situation is a snapshot of a national picture. The economic slump has idled about 70,000 Union Pacific railcars, now sidetracked wherever space can be found, said Zoe Richmond, a Union Pacific spokeswoman in Roseville, Calif.

This weekend, the Group of Eight, all talked about the need for withdrawing stimulus. My interpretation of the talks were different. This talk doesn't come about, because the economies are booming, but because they want some of the commodity speculators reigned in, and they want the dollar and bonds to get a bid.

G-8 officials said it’s prudent to consider what exit strategies to deploy once global growth is secured and asked the Washington-based International Monetary Fund to examine how to do so without reigniting the two-year financial crisis.

Once exit strategies start to be implemented they will have a considerable impact on the currency market, as currencies most at risk from debasement fears have earned a reprieve.

It's fine for the stock market to reflect higher prices but don't let the speculators reign in the commodity market!

So the ministers talk up the dollar and bonds, and hope commodities pull back.

Because the new bad guy isn't oil, but David Letterman!

Palmoni: are you still setting a price target on Google at $500 by July 17? Thanks.