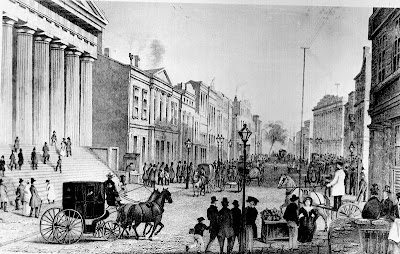 Trying to discover the northwest passage to China, captain Henry Hudson, landed in New York harbor instead, by the Mauritus River, which of course was renamed the Hudson. Hudson was the first person to put Manhattan on a map. Manhattan, comes from the word Manna-hata, which was the name the European settlers used from the Native American tribe, the Lenape, who lived their, which meant "the island of many hills."

That was a better etymology of the name than the word manahachtanienk which means "a place of general inebriation!"

New Amersterdam, a fortress city for the protection of new arrivals, was founded on Manhattan Island in 1625 by Wilem Verhulst of the Dutch West India Company. In 1626, the Island was bought from the Lenape for 60 guilders worth of goods, (or about $24 in those days) by Peter Minuit, who did the deal with the Canarsee tribe, who didn't own or have any rights to the island.

It was the first instance of a Wall Street misrepresentation. Broker a deal, and misrepresent what you are selling!

The Lenape thought they were getting a free lunch; to them land was like air, it couldn't be owned, so it was only being shared with the Europeans. But later on, they wanted the land back, so they wanted to back out of the trade. The settlers then built a wall to keep them out. That wall of course, later became the street we know today---Wall Street.

And Wall Street is still fighting to keeping the people out of "their" club, with their own version of the "velvet rope!"

But unlike Ms. Jackson, their case of introspection only occurs when their profits and inside deals are threatened.

After all, would Wall Street ever say this? "Just because you have money doesn't mean you're happy. It doesn't mean that all your problems go away."

Because it's only okay to hear "Beat It" on iTunes but not on Wall Street!
Posted by Palmoni at 6:26 AM