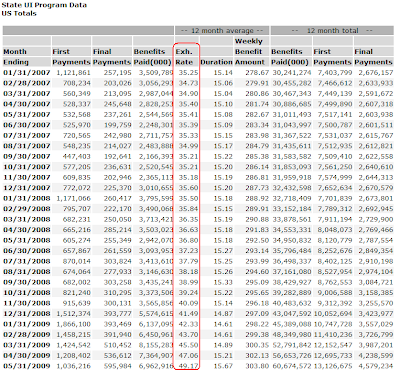 Obama came out today and said the Unemployment Rate could exceed 10% in the next couple of months. The table on the top of the page, is the % of unemployment with exhausted benefit claims--those who use up their benefits.

You can talk what you want about the table and statistical methodology, but you need to consider that its = (# losing their benefits/ # new unemployment claims). Obviously, the # of people losing (exhausting) their benefits > # of new filers, so this helps explain this in today's WSJ:

Welfare rolls, which were slow to rise and actually fell in many states early in the recession, now are climbing across the country for the first time since President Bill Clinton signed legislation pledging "to end welfare as we know it" more than a decade ago.

Twenty-three of the 30 largest states, which account for more than 88% of the nation's total population, see welfare caseloads above year-ago levels, according to a survey conducted by The Wall Street Journal and the National Conference of State Legislatures. As more people run out of unemployment compensation, many are turning to welfare as a stopgap.

This is part of the information that the market was trading on today.

It's not new news, but it puts in a statistical format the unemployment numbers that came out in the first week of June, that were erroneously heralded as good news.

And the President "confirmed" it, with his 10% prediction.

Still, unemployment is a lagging indicator, but the damage was done.
Posted by Palmoni at 6:33 PM