Bulls snatch victory from the bears 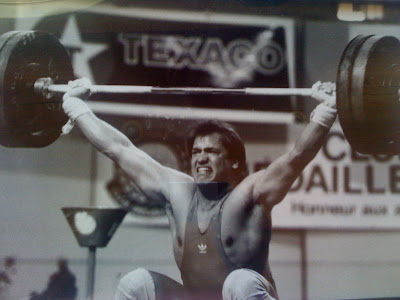 They say the snatch is one of the fastest movements in sports. It better be. If you don't get under the weight in a hurry, it will fall on your head. The lift teaches speed!

But lifting like this is hard on the body. So now we save the speed for the market.

This market teaches you to be fast. But it wasn't always like that.

Back in the mid 80's, we just traded Disney, Pfizer and Digital Equipment. Until DEC topped out in July of 87. Then we just traded Ford-it gave you action until the week before the crash. And that's when the OEX options really caught on. Everyone became option junkies trading the indexes! But not us. We were trading that way before the pros ventured in!

But before the pros came in, we had partially gamed the system. Then, the option market makers really ripped you off, and you had massive time delays; especially when you had a market move. We used to hang out at the CBOE, and see the OEX order book on the screen upstairs, and if we saw something amiss in the book, versus the market, we'd call in trades on the payphone across the street, that my buddy was a permanent fixture at, to Merrill Lynch, who then had the quickest option execution on the street. We could then watch the trade get done through the window. The delay in quote updating was our version of "front running" the market. Any money we made, we had to pull out to live on; so if we didn't make nice returns each month, we either didn't eat, or we had to find a job. So we learned to work the market.

But after the '87 crash, that edge, of course left. You had too many people playing the OEX. It became efficient. But soon after the crash, you didn't need the edge. The market just went up, despite every drop being heralded as the next great crash. We had already had the crash. But now, we still hear the same stories!

My alarm clock used to be the drop of the Wall Street Journal on the front step. When I heard it's flop, I awoke, and poured thru the pages, trying to get an information edge, before anyone else. Remember the movie Wall Street? How about Gordon's giant cell phone? And Gekko parsing the WSJ for information? Would that work today? When information is tweeted?

Or maybe it just means that the bankers are going to start whispering secrets again!

Today the trading edge is measured in milliseconds, so you have to have a different edge. For some it's the morning research. I go through about 15 firms research in the morning, to try and gauge the direction that the wind on Wall Street is blowing, and to try and determine what is real, and what is bunk. Now that has become an art in itself, because everyone else is doing it. Remember when you just could go through the morning tout services that just compile the morning research? Now that's already stale!

And with all the action in ETF's who needs to pick stocks? Each day is another theme of what's hot, and what's not. The only edge you can really find, is in the stocks that aren't followed. And then you need to swim through the promoters stories!

So who wants do all this heavy lifting? The market now appears, to be getting closer to the inflection point, where stocks can now soon go up together, now that all the brokerage firms and investment banks are just playing programs against each other.

When that happens, the edge goes to those fully invested--from the "smart money" hedge funds, to the dumb money "mutual funds." Just like it did after the crash of 87.

Maybe the bears think the bulls just have had a barbell dropped on their head.

And it wouldn't be the first time, that this bull has snatched victory from someone who was too over-confident!
Posted by Palmoni at 1:38 PM