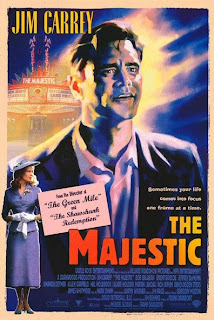 What does anyone really think? That Bernanke will have a "Majestic" moment?

Will he be Luke, and not Peter? That's only a movie moment!

But does anyone think that the town folk will be waiting for him, when he comes in on the train from Washington?

He is now credited for saving the financial world from the mess his policies "fostered." Jacking up short term rates, when the whole world was financing LT with ST paper? He'll be the sop thrown to every homeowner, that lost their home, because Greenspan recomended ARM's while he and Ben were raising rates.

Because isn't there any culpability at the Fed?

Bernanke said the Fed acted with "the highest integrity?"

Isn't that just what the fired Inspector General said?

Today is the fall season for Bernanke, and springtime for Larry Summers!
Posted by Palmoni at 10:18 AM