The end of the rally? 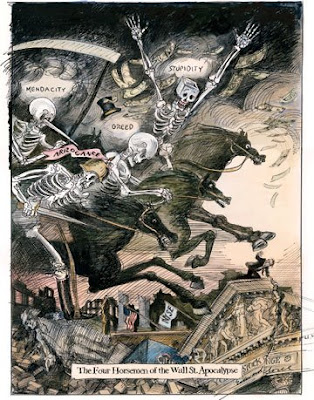 A lot of people are looking at today's action, and saying that the rally has ended. Oil was weak, but oil should be weak. It needs to come down. Oil's weakness brought all the material stocks down with it, as Wall Street needed an excuse to sell, so they took it.

In NASDAQ land, the four horseman, have also been hit. GOOG has come in 30 points on worries about Bing, and a scurrilous channel check report on advertising, AAPL has pulled back 10, RIMM, which reports earnings Thursday after the close, has come in 6 points in the last couple of days, along with AMZN.

The economic reports are still uninspiring, and stocks on the charts look extended. Sideways action is either accumulation or distribution; but you normally only hear what it was after it happens.

Looking back, it looks like the best sale for traders was in the pre-market on June 5 on the ugly unemployment news, that was roundly heralded as good news; when it in fact wasn't.

But if I take those pre-market numbers of June 5, and subtract 5%, that will give you the same pullback, that we had before we started the second leg up on this market on April 22.

However, there is a difference this time. Then we were still discounting despair, and now we have already discounted some hope, as we are now 100 points higher on the S&P. So we hear talk of a 15% pullback in the S&P. We went from 666 to 956-290 points. If we were to pull back 15% on the S&P, we would almost be back to 800. That is just a fantasy figure for those that missed the rally. Why don't they estimate at least something that's in the realm of reality?

This time, unlike last time, at least we are getting a bit of a time correction, but since it has gotten harder to make money, traders are quicker to take profits in this latest churn. Losses are the quickest way to get cautious.

And that's just where we are.

So the buyers get cautious and step aside, and see what the sellers have. And I don't think they have much.

And it's just not much more than that.

Because we are almost there.
Posted by Palmoni at 7:44 PM