Revisiting a cold day in hell 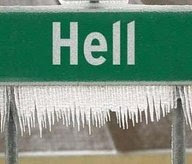 The bears, need a stock pump, to get their portfolios out from being underwater, while they're stuck in hell. They should be buying FlowServe (FLS 78.30). And that's a stock pump! On a number that the stock chart says is heading to par! After all, isn't the counter-intuitive play on Wall Street the one that works? Because who needs a pump in hell!

So Wall Street came in and knocked it down Wednesday, and today they bid it up.

In that piece, I said it would be a cold day in hell if the next 50 points in the S&P will be down. You can now book that bet! I don't think AC/DC will be singing "Hells Bells" anytime soon!

But just so you remember the Flowserve tout, I'll give you a "college" chemistry question, and the "student's" supposed answer.

Therefore, no souls are leaving. As for how many souls are entering hell, let's look at the different Religions that exist in the world today. Most of these religions state that if you are not a member of their religion, you will go to Hell. Since there is more than one of these religions and since people do not belong to more than one religion, we can project that all souls go to Hell.

With birth and death rates as they are, we can expect the number of souls in Hell to increase exponentially. Now, we look at the rate of change of the volume in Hell because Boyle's Law states that in order for the temperature and pressure in Hell to stay the same, the volume of Hell has to expand proportionately as souls are added.

This gives two possibilities: If Hell is expanding at a slower rate than the rate at which souls enter Hell, then the temperature and pressure in Hell will increase until all Hell breaks loose.

2. If Hell is expanding at a rate faster than the increase of souls in Hell, then the temperature and pressure will drop until Hell freezes over.

So which is it?

If we accept the postulate given to me by Teresa during my Freshman year that, "it will be a cold day in Hell before I sleep with you, and take into account the fact that I slept with her last night, then number 2 must be true, and thus I am sure that Hell is exothermic and has already frozen over.

The corollary of this theory is that since Hell has frozen over, it follows that it is not accepting any more souls and is herefore, extinct...leaving only Heaven thereby proving the existence of a divine being which explains why, last night, Teresa kept shouting "Oh my God."
Posted by Palmoni at 9:29 PM