"Give him a couple bucks" 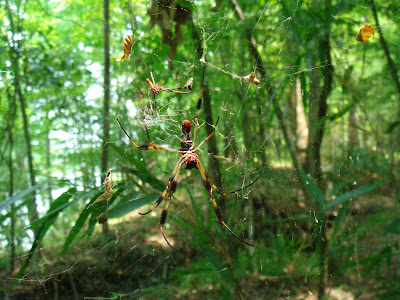 The Apalachicola River has streams and swamps that would make Deliverance proud. In fact, it's one of the most bio-diverse places in the US, and it's also the location of Tate's Hell. In 1875, a farmer named Cebe Tate was lost in it, trying to hunt down the panther that was killing his livestock. He was found a week later; snake and insect bitten raw, near Carrabelle, FL. The first thing he said was, "My name's Tate, and I've just been through hell."

I've been in that swamp, up in Seminole country, dragging out some fossil treasures, but not before an encounter with a cotton mouth rattlesnake, a black bear, and running into enough spiders to make you paranoid. After a while, the adventure starts to feel perilous.

So for those who feel snake-bitten by this market, and stuck in market hell, "Deliverance" is coming.

Because I don't know if the Get out of Hell Free (GOOHF) card works for stocks!

So your swamp paired trade is St. Joe and the SPDR's, and a side of cliff.

The land owned by St. Joe (JOE 26.42) is still pristine, and the stock has already consolidated for a couple months. The September 30 calls are $1.1 Between now and then, you have a good chance of another short squeeze. You should be able to make a couple bucks on the calls.

The S&P, as I've been touting, is not heading down, like some of the discredited bears want you to desperately believe. That's just nonsense.

So look at the Sept 101 calls on the S&P at 2.14. They are a couple bucks, and it's the easiest no brainer double on the market.

And for those who still don't know "what are we going to do" take Cliff Resources, and the July 32 calls at 2.20.

Because everyone needs deliverance!
Posted by Palmoni at 5:15 PM

A cottonmouth is a water moccasin, not a rattlesnake.

I was wearing my "rattlesnake" boots--so unlike Cheney, I misspoke.

It was a moccasin.

Kate Spade Totes Sale 50% Over reason is in fact to dry out body is one of the greatest problems. [url=http://www.katespadesite.com/]ケイトスペード バッグ[/url],You most likely at the moment understood this skin area ailment manifests through follicles blocked in addition to lifeless body structure along with herbal oils, [url=http://www.katespadefassyon.com/]ケイトスペード 財布[/url],that may develop towards considerably more unpleasant varieties of lesions around the skin anytime remaining with no treatment.[url=http://www.oakleyautoretto.com/]オークリー サングラス 人気[/url], Therefore right now you're most likely asking yourself your self precisely how arrives the fact that epidermis which does not have the actual oils offers it's pores of the skin blacklisted. The excuse is in fact that the free of moisture body can also be flaky, [url=http://www.seebychloejap.com/]シーバイクロエ アウトレット[/url],meaning it's tissue could pass away in addition to fall away more than commonly.

Any woman's purse could unquestionably make or even crack her ensemble. This is the reason this Spring, Kate Spade provides the Precious metallic Coastline Maryanne handbag from bags on the net retail store. [url=http://www.gagawatchjap.com/]http://www.gagawatchjap.com/[/url],A purse possessing some sort of appear of wonderful which could easily transition from day of the week to nighttime. This very seriously is what every single single lady would like. [url=http://www.gagawatchjap.com/]ガガミラノ 時計[/url],Often the Maryanne more than backpack by means of Kate Spade serves as a combination while using pebbled, hand-stitched feel with the Dior tote making use of the chained straps regarding Chanel. [url=http://www.seebychloejap.com/]シーバイクロエ 財布[/url],This specific purse could well be the very best regarding bothf fashion planets and intensely recession-friendly.