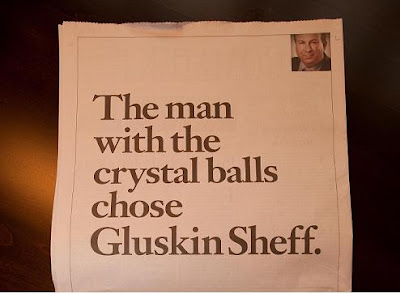 A week ago Monday, we heard from David Rosenberg. Fair value for the S&P was between 600-840. Whatever his definition of "fair value" is!

It's obviously not the markets!

Now you know how he got this this forecast? If you just disregard all the intellectual gobble gook, you end up with this:

So the EPS range is simple: S&P top earnings at $70 assuming the mid-cycle theory works, and low earnings at $50 (assuming a 30% drop from the Profit/GDP mean reversion phenomenon first forcing LTM EPS to go from $40 to $30 and then applying the 60% premium). As for the multiple, Rosie believes the P/E should approximate a Baa bond yield, leading to an "appropriate" multiple of 12x.

So 12X multiple, on estimates of earnings that can vary by 40%. Is that rigorous? It's not. How could it be rigorous, when we are already 100 points above his high end valuation of fair value?

The other day, I was driving in an exclusive neighborhood, and I saw a very large and heavy TV out for the trash, along with an empty flat screen box.

But the TV was trashed. It was obviously too heavy to cart away, so somebody broke the screen, and took out whatever components that were valuable.

From this information, you could say that the consumer was so tight, that they have started recycling TV parts for money. OMG-give the market a PE of 10! Nobody has any money!

Or you could appreciate his ingenuity, and see the new TV that was bought and give the market a higher PE because of the beaten down consumer's creativity.

So what PE should we give it?

Actually, they should be much higher.

Is it any wonder why people are buying? Because 1232 my friends, is fair value for the S&P next year!

Now you bears may think this is just poppycock; but go ahead and think that to your own financial peril.

Today, on Fast Money, David Rosenberg is telling us, "what he needs to see" to be convinced that this market rally is for real.

He needs to see a bottom in employment, and an increase in consumer spending. But now he says, the onus is now on the bears to prove their points. And from a fund flow, and a technical viewpoint, he thinks the rally could continue.

David Rosenberg, gave his mea culpa. He's a brilliant guy, that called the downdraft in the market, who made a mistake, overstaying his bearishness. And I've been too hard on him for that. So you get my mea culpa too!

Now on the show, they asked David, about the latest advertisement for his new firm--The man with the crystal balls...

His reply, which should be a Wall Street classic:

"That's why I never cross my legs while in public."

Now if we can only get Meredith Whitney to uncross her legs, and tell us what she thinks!