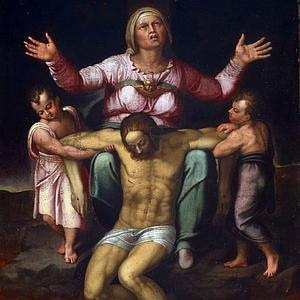 NYP
This unfinished painting of Jesus and Mary could be a lost Michelangelo, potentially the art find of the century.

But to the upstate family on whose living-room wall it hung for years, it was just "The Mike."

When the kids knocked the painting off its perch with an errant tennis ball sometime in the mid-1970s, the Kober clan wrapped it up and tucked it away behind the sofa.

There it remained for 27 years, until Air Force Lt. Col. Martin Kober retired in 2003 and had some time on his hands. His father gave him a task -- research the family lore that the painting was really a Michelangelo.

..Still, Forcellino skeptically visited Kober's home outside Buffalo to view the painting, and the trip left him a bit breathless.

"In reality, this painting was even more beautiful than the versions hanging in Rome and Florence. The truth was this painting was much better than the ones they had. I had visions of telling them that there was this crazy guy in America telling everyone he had a Michelangelo at home," Forcellino said.

A scientific analysis of the painting proved that the Michelangelo claim was not so crazy.

Forcellino told The Post that infrared and X-ray examinations of the painting -- on a 25-by- 19-inch wood panel -- show many alterations made by the artist as he changed his mind, and an unfinished portion near the Madonna's right knee.

"The evidence of unfinished portions demonstrate that this painting never, never, never could be a copy of another painting," Forcellino said. "No patron pays in the Renaissance for an unfinished copy."

Additionally, the provenance, or ownership history, points to the work being done by Michelangelo around 1545 for his friend Vittoria Colonna. That was about 45 years after Michelangelo did his famed "Pieta," or pity, sculpture of Mary holding Jesus, housed in St. Peter's Basilica.

The Pieta painting was passed to two Catholic cardinals, eventually ending up in the hands of a German baroness named Villani.

Forcellino said Herman Grimm, a noted Michelangelo biographer, saw the "Pieta" in 1868 and attributed it to the master. Additional evidence includes a letter in the Vatican library discussing a Pieta painting for Colonna, he said.

"I'm absolutely convinced that is a Michelangelo painting," Forcellino said.
Posted by Palmoni at 8:33 AM

This story has to be some kind of hoax.

If this is a real Michelangelo, then he must have done it on a drunken dare, because it's heinously ugly.

There is no sensible compositional focus. Mary is practically a diesel dyke, wider than Jesus. She looks like she's about to His body is simply boring. It's awkwardly and unnaturally composed and awkward. The one foot is not completed because there's no possibly way to complete it properly with the mistakes, unless Mary is an amputee.

And following is the study for the actual painting for Vittoria Colonna:

There is only one surviving non-fresco painting by Michelangelo anyway; in the Uffizi.

That is also good.

I'd take this "heinously ugly" painting