Adobe on the block? At least according to the NY Times!! 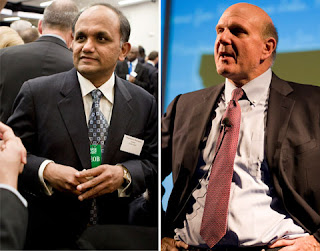 Well at least I bought this number at 26 when it was puked up by the world!!

The meeting, which lasted over an hour, covered a number of topics, but one of the main thrusts of the discussion was Apple and its control of the mobile phone market and how the two companies could partner in the battle against Apple. A possible acquisition of Adobe by Microsoft were among the options.

The New York Times learned about these meetings through employees and consultants to the companies who were involved in the discussions that took place or familiar with their organization, all of whom asked not to be identified as they are unauthorized to speak publicly by Microsoft or Adobe. Those involved in the meeting, from its logistical set up to the discussion that took place between the two companies, were instructed to stay very quiet about the two companies holding council.
Posted by Palmoni at 3:30 PM

so it's just talk right now but what are the chances of going through?

Well I don't know--but MSFT went to ADBE's headquarters--so I would think that would mean that the interest is more than just a partnership--and thus the takeover talk.

Of course, I've been known to talk my book--but I think they want them!

Thoughts on MSFT + ADBE CEO Meeting
␣ We Think A Deal Would Make Strategic Sense, But Is Also Unlikely On 10/7, ADBE stock rose 12% after the New Yor Times reported the CEOs of both cos met in San Francisco; the article noted a merger was an option. We think the idea has strategic value given ADBE is 1 of the biggest sellers of Windows- based software and has leading design & development tools for web & mobile that enable alternatives to Apple iOS platform. On the other hand, CEOs talk regularly given pdt interaction, high price & antitrust could be hurdles, and MSFT has a spotty M&A track record.
␣ Pros: A Powerful Combination to Counter the Apple Threat (1) ADBE is one of the largest sellers of Windows-based software (est. ~75% of its revs); (2) both cos are focused on convergence of designers & developers – portfolio would include Visual Studio, Flash/Flex, Creative Suite; on design side, MSFT tried with Expression pdt family but has little traction; (3) product synergies in web video & rich media – Silverlight & Flash; (4) seamless integration of PDF format; (5) pdt synergy b/t SharePoint and LiveCycle; (6) Adobe’s work on mobile & other consumer devices, incl. for Android, could revive MSFT’s own efforts.
␣ Cons: High Price, Integration Risk (1) We estimate ADBE’s asking price (EV) could reach $18-20Bn+ (~25-40% premium), which could strain MSFT’s balance sheet; (2) potential antitrust issues, as MSFT/INTU was blocked in mid-1990s, though the landscape is now different; (3) MSFT’s spotty track record with large M&A; (4) could alienate some ADBE partners.
␣ Valuation: The stock trades today at 13.5x our CY11 EPS estimate Our $30 PT = 13x P/E (~40% discount to 20-yr 22x median) on our PF EPS estimate 5-8 quarters out.