Another storage play on the shopping block! 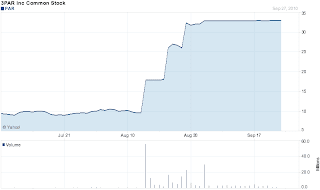 Remember when 3Par was taken out?

Now ISLN is shopping itself.

It should open in the 30's Monday.

Isilon Systems Inc., the maker of devices used to store video, audio and digital images, is seeking bidders for a possible sale, according to two people briefed on the matter.

The company hired Frank Quattrone’s Qatalyst Partners to canvas would-be acquirers, said one of the people, who declined to be identified because the plans haven’t been made public.

Isilon, based in Seattle, is seeking to emulate the bidding war that surrounded rival data-storage maker 3Par Inc., both people said. 3Par’s plans to sell itself led to an 18-day tussle between Hewlett Packard Co. and Dell Inc. HP won out last month with a price of $2.35 billion, or $33 a share, triple 3Par’s stock price before the public bidding began.

ISLN is sexier than some of the other names in storage, so it should get a good premium.

And that leaves just CVLT and CML next!

Further information on these names can be found here, when Barron's touted these names as takeout candidates.
The Next M&A Candidates in Storage

What is left to possibly buy?
Compellent Technologies (CML): Compellent offers automated tiered-storage solutions that dynamically migrates data to the optimal storage tier based on frequency of access. This helps in that there are expensive, fast Hard Disk Drives (HDD), and cheaper, slow ones. Compellent's software helps with this issue; however, many other vendors are coming out with their own tiering software, making Compellent less relevant and differentiated. We don't follow the company, and don't believe that their technology is truly needed by any of our major vendors. With that being said, many of those that have followed 3PAR thought the same thing about that company's offerings.

Isilon Systems (ISLN): Isilon's Scale-out Storage systems provide a high performance, high scalability system for managing file-based data and applications in a clustered storage solution. Mainly their software is helpful for a few industries like motion pictures in that Isilon's system can handle very large files that are not typical Word, Excel, e-mail kinds of items. Audio and digital images are also logical to be used with an Isilon solution. Isilon focuses on industry verticals of the government, geospatial, higher education, energy and others.

CommVault Systems (CVLT): CommVault offers modular data-management software solutions to support backup and recovery management; data deduplication; virtual infrastructure, storage optimization and eDiscovery/compliance. It's not immediately clear for whom in our coverage universe CommVault's solutions would be complementary. Backup is a much needed capability, but we don't believe its growing as fast as the need for NAS.
Posted by Palmoni at 9:41 AM