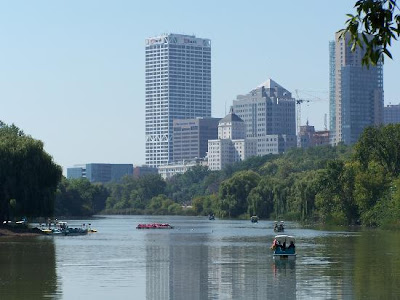 I love these and I like MI and Regions Financial (bought under 4). All of these names have raised their money, and are starting to break out.

With the increasing targets on BAC by Morgan Stanley, and now Dick Bove, it means that these under appreciated and under-owned regionals will now get a second look by the big guys. After all, wasn't BAC just a hat size not to long ago? But it was sure pumped here at under $5!

I like the (callls) Aug 7.5's on FITB at 1.30; the July 5's at the same price on MI, along with the September 7.5's at .65 cents. I don't think Marshall & Illsley will give you the time to buy this stock, even though they just raised a half a billion on a secondary Friday.

I think MI will have a move like STI did, after it raised money. Ten days ago, they sold the stock in the hole at 13, it was 17.50 five days later.

HBAN was pumped by Cramer on Mad Money, and the stock moved sharply in after hours Friday by 10% to $4.60. The number of the gift is "5" and "coincidentally" the new CEO, bought 555,555 shares in the secondary.

Don't think that Wall Street won't be looking for something else to buy Monday morning.

Especially when these little banks are "gift wrapped!"
Posted by Palmoni at 4:04 PM

How much for $500 million worth? With a Bernake signature!