The next leg up!! 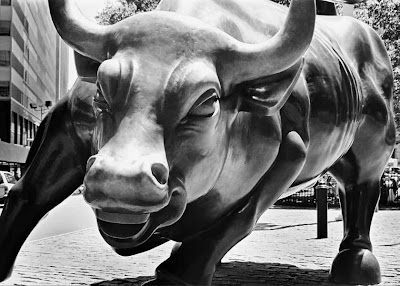 how far up? did you close your short positions?

I covered my covered short calls two days ago, and AXP and COF shorts yesterday.

BIDU covered at 271, and sold my puts then. Got lucky!

My only short exposure is FXP-I'm long the short China ETF, which looks like a mistake now, but I'm holding that, because I just am not going to get whipsawed again.

I covered my short calls on RIMM today, and shorted puts on NKE and MON on today's weakness.

Went long FCX and CAT this morning on the DE tout.

I bought the 93 calls on the SPY for July as a spec to cover the losses on some market hedges. So I went from hedged to about 2X long, but I knew I could get whipsawed, and it happened.

And you could just feel that the bears had started to press again. Look at the short interest--starting to increase again.

I just don't see the wisdom of being short. Look at this market--they can move it at anytime. Who knows how high it could go?

i have to admit it was pretty scary....i didn't have teh cash to go short for the short term but boy i thought it was rolling over...it still might but we'll need to see it drop quite a bit to make that happen..