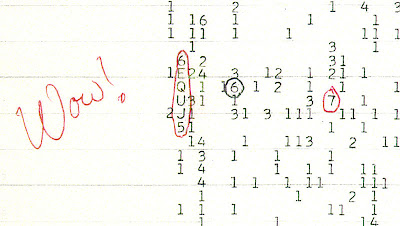 With the Universe so ancient and large, theoretically it should be teeming with extra-terrestial life. The only problem is, this statement is inconsistent with the observational data--The Fermi Paradox.

Where are the extra-terrestials? Maybe we can't see them, because they are already here. In fact, we are all aliens. We really live in a simulation, or a parallel universe, or maybe they exist, but they haven't decided to communicate with us, or they haven't had enough time. Maybe the extra terrestials economy is suffering, and they are staying at home, surfing their own version of the Net. No interstellar leisure travel! Or maybe we're not listening to them on the right frequency, or we don't know how they communicate. After all, how many "Wow" signals have we had?

In 1938, the same month and year that Superman was first published, Fermi won the Nobel prize for physics. He studied beta decay; radioactivity that pukes up an electron, and a ghost particle, the "little neutral one" the neutrino and it's involvement nuclear reactions. It was a bit different than kryptonite's radioactivity driving out Superman's energy!

In the stock market, beta measures the correlation between asset prices and the stock market. Wouldn't being short in this market subject you to beta decay? With a kicker of kryptonite? Because the bears energy is being driven out.

They are in Bizarro world, following it's code: "Us do opposite of all Earthly things! Us hate beauty! Us love ugliness! Is big crime to make anything perfect on Bizarro World!"

Maybe the bears have their own "Fermi Paradox!" They make up new reasons every day, because stock prices are supposedly different from the data.

Maybe it's time to change the terms. Remember when no one had an interest in the flickering lights in the sky? Until they became "flying saucers?"

But now Wall Street understands the "Free Money Paradox!" And the bulls are picking up the paper on the Street at the corner of Wall and Broad! Despite the bears saying "bad buys! It's still "good buy." Ask Jerry!

But where is the bulls argument? The "Wow" data? The antidote to the supposed "well reasoned?" The kryptonite to the bears? I'll leave that to the words of an anonymous poster "X."

"Bear lies vs reality
- economies are in recession (GLIs are turning across the world)
- its only an inventory rebuild (consumer confidence is up globally, an early indicator of end demand)
- valuations are rich (on depressed earnings with 1-time losses and low operating leverage)
- mortgage rates are rising (credit spreads, libor at lows)
- bond mkts are not rallying, its only the dumb equity mkt (bonds have rallied with equities)
- smart money is selling the rallies (really smart $ aka paulson is buying mbs, distressed debt, cre)
- mkt is overbought (on this i agree)
- US housing has a massive overhang (possibly but housing in other mkts improving)
- 2H recovery is too optimistic (2H GDP will be +ive and 2010 2-3% globally)
- Baltic index weakening (could see summer pause in china ore imports but china port activity getting better even for exports)
- Its all only getting worse as unemployment increases and credit is tight (autos production will improve, steel inventories worked out, EM consumer is back,ISM new orders indicates industrial demand will improve, property mkts globally improving, even initial claims peaking)
- MS credit conditions index @ high
- Record 65% of companies think earnings upside ahead
- Railroad: volumes stabilizing
- Semis: inventories depleted. May/June end demand better
- Gold peaking
- Banks: NPL to peak in 3q09
- Asset mgrs: inflows improving
- Autos: cash for clunkers helps, China strong
- China: autos, consumer, air traffic, mkts all strong
- Euro data mixed: ZEW peaking, UK better (but europe is a laggard)

The US mkt is obsessed with levels (950 for now) and missing the turn in the GLIs. Buy EM if not the SPX"