Did the Government prop up the Transformer box office? 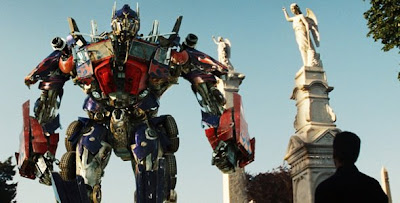 Or was it just young boys?

It can't be! Weren't the reviews terrible? Didn't the critics complain about Megan Fox and her toilet habits? And didn't they just hate the movie?

How about Roger Ebert?

“Transformers: Revenge of the Fallen” is a horrible experience of unbearable length, briefly punctuated by three or four amusing moments… If you want to save yourself the ticket price, go into the kitchen, cue up a male choir singing the music of hell, and get a kid to start banging pots and pans together. Then close your eyes and use your imagination. The plot is incomprehensible.

How about Joe Morgenstern from the WSJ?

Michael Bay’s 150-minute celebration of attention deficit disorder is like a July 4th fireworks display that doesn’t end until July 8th and makes you swear off Roman candles for life.

How about the Hollywood Reporter?

With its intelligence at the level of the simple-minded, however, the film is not likely to attract moviegoers who seek something more than a screen filled with kaleidoscopes of colored metal.

How about USA Today?

Bigger, louder, longer and more metallic is definitely not better.

How about Rotten Tomatoes? A rating of only 20%?

Maybe JPM and Goldman Sachs were buying movie tickets at the Government's behest, to give us "green shoots!"

Transformers, was to the critics, as this bull market is to the shorts.

which bull market? Ah the one that stuck in the range 900-950 during last 2 months? Wow, thats a bull indeed, just keeps going up non-stop. Even the EOM/EOQ can not pull it higher than 950. What does it tell you about the prospects of this bull? Right, the prospects are bull-sh*tty.

Hi there Palms. Are you still keen on Google for July?

Eric Schmidt said that things in the advertising space had bottomed, and I think this quarter, they'll beat--otherwise why else would you say that? bing.com actually is a cool search engine, and it has a higher monetization rate, so those facts are pressuring GOOG but I think you get 40 points on earnings day

There is no underestimating the idiocy of the American public when it comes to matters of taste and finance.

Anon: Wait until you meet Delilah--she might change your views!