Mark Cuban to buy the Cubs? 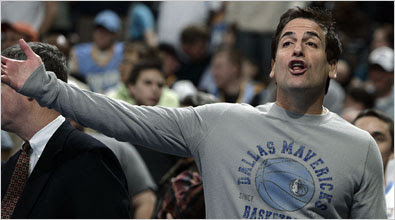 Buying the Cubs is the latest project for Cuban, the owner of the N.B.A.’s Dallas Mavericks, but he is not alone in the expensive quest. Four other individuals and groups have given the debt-laden Tribune Company nonbinding offers of at least $1 billion for the team, its stake in Comcast SportsNet Chicago, and 92-year-old Wrigley Field.

Cuban is reported to be the top bidder, at nearly $1.3 billion, but the auction will begin soon, after the applicants and their bankers delve further into the assets books.

“The Cubs are an amazing franchise and brand,” Cuban wrote in an e-mail message. “I think the owner of any major sports franchise has two jobs: first, it’s to work hard to win a championship year after year, and second, to be the caretaker of the franchise in the community.”
http://www.nytimes.com/2008/08/03/sports/baseball/03cubs.html?_r=1&ref=sports&oref=slogin

Is there really anyone else that should own the Cubs than Mark Cuban? To own the Cubs is in his DNA. Cuban even has a Cub in his name!