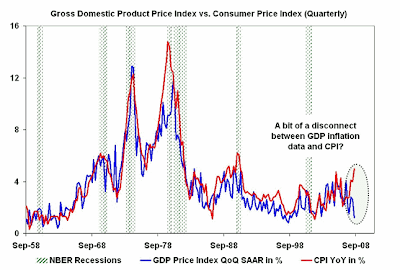 Barrons had some commentary on the 3.3% GDP figure:

"Comes now the so-called preliminary estimate that claims second-quarter GDP grew by a much more robust 3.3%. That was hailed by the incorrigibly constructive contingent in the Street as evidence of the resiliency (favorite word) of the economy and prompted the thinned-out ranks of investors to put their worries and their plans for an extra-long weekend on hold and pile into stocks. Hooray! Hooray!

The key here is the GDP deflator, which purports to adjust GDP for the impact of inflation; it's a curious calculation in that, contrary to its moniker, it seems designed to do the exact opposite of deflating GDP.

Thus, according to this accommodating measure (accommodating, that is, if you're determined to put a good face on a dreary report), inflation grew at an improbably restrained 1.33% in April-June. And maybe it did -- but not in the good old U.S. of A. However, obviously more important than accuracy to those doing the calculating is this simple equation: The lower the deflator, the greater the growth of GDP. (see graph above)

THE ASTUTE ECONOMY-WATCHER for Merrill Lynch, David Rosenberg, also strongly advises digesting the suspect GDP report with a "very large grain of salt." Among other things, he casts a skeptical eye on how the report treats the decline in corporate profits. (We won't keep you in suspense: The answer is: "gingerly.")

More specifically, he notes, "national-account corporate profits declined at a 9.2% rate in the second quarter." For domestic industries, he goes on, profits are down 14.4% year over year.

But according to the GDP report, domestic nonfinancial profits fell at a much sharper 22% annual rate. The reason the drop in total corporate earnings was limited to 9.2% was that, David relates, profits in the financial sector, so claims the report, surged -- get this -- at a 27% annual rate.

Just look at the last line above. Now the FDIC had this to say about Q2 profits for the banking system:

Federal Deposit Insurance Corp. data released Tuesday show federally insured banks and savings institutions earned $5 billion in the April-June period, down from $36.8 billion a year earlier. The roughly 8,500 banks and thrifts also set aside a record $50.2 billion to cover losses from soured mortgages and other loans in the second quarter.
http://www2.tbo.com/content/2008/aug/27/bz-bank-profit-plummets-86-in-second-quarter/news-money/