The return of Harry Crumb! 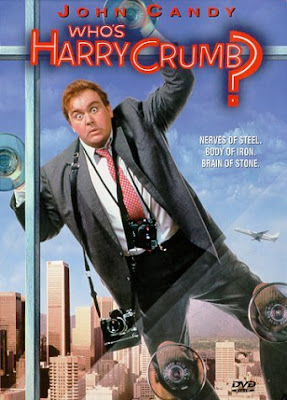 Seen at CNBC. With the Dennis "the Real Deal" Kneale on CNBC reports!

And now, he has been reincarnated as Dennis Kneale, the likable but bumbling, but annoying, blogger basher with his own show on CNBC at the 8:00 pm time slot.

Dennis, it appears, was being put out to pasture, so CNBC decided to make him a bull, and put him on his own show. It was a good excuse to get rid of him. But he'll succeed, despite CNBC's intentions, just like Harry Crumb did.

Because the economy is turning up, the stock market is going higher, and the bearish pundits, and bearish bloggers, are just completely wrong.

And whether the bloggers like it or not, Dennis is now CNBC's new face of the bulls.

If Dennis Kneale, can beat these bearish pundits at their game, what does that say for the intellectual rigour of those bearish, who can't see the coming economic upswing, or the next big move higher in the market?

It looks like they met their match, with the "master of disguise!"

And after INTC's better earnings tonight, it looks like the bears pores will be getting just a little bit tighter!

Because when males of Cambarus bear pores, it is always upon the third leg!

And that's where we are going.

Because we are at the start of the third leg up in this market!
Posted by Palmoni at 7:44 PM

Good earnings season so far - financials, tech, commodities, transports, some industrials, healthcare - but no believers as investors focus on unemployment and consumer confidence. Mid 2007 you could not convince anyone the economy was heading down - now you cant convince anyone its heading up

The rally in healthcare has been outstanding but no one cares!

This story explains that.
http://aaronandmoses.blogspot.com/2009/04/legs-are-following-off-bears-stool.html

It's going to be end of mine day, however before finsh I am reading this enormous piece of writing to improve
my know-how.

Stop by my site - learning to draw

Hi there, this weekend is fastidious designed for me, because this
occasion i am reading this impressive educational paragraph here at
my home.

I loved as much as you will receive carried out right here.
The sketch is attractive, your authored material stylish.
nonetheless, you command get got an edginess over that you wish be
delivering the following. unwell unquestionably come more formerly again since exactly the same nearly a lot
often inside case you shield this hike.

Here is my web blog - best supplements for muscle growth

* Remember if you can't complete the entire workout in one session, you can break it into two
sessions during the day. The first step of the diabetes diet plan supposes a fast weight reduction.

I'm extremely inspired along with your writing skills as well as with the structure for
your blog. Is that this a paid topic or did you modify it your self?
Either way keep up the nice high quality writing, it is
rare to look a great weblog like this one nowadays..

Incredible! This blog looks just like my old one! It's on a
completely different subject but it has pretty much the same page layout and design. Wonderful choice of
colors!