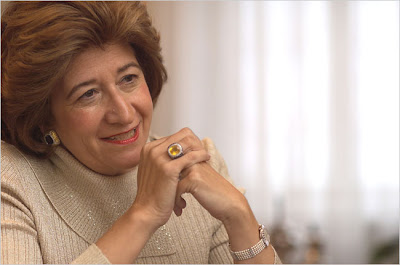 U.S., U.K. and Austrian prosecutors are investigating a former Austrian fund manager they believe was paid more than $40 million in kickbacks to funnel billions of dollars of investments to Bernard Madoff.

Madoff victims will have a field day with this. Bank Austria, owned 25% of Bank Medici, while Sonja Kohn owned the rest.

$3.5 billion from their investors went into Madoff's pockets, and $32 million of kickback money went into Infovaleur Inc., owned by Ms. Kohn.

Isn't that French for "info value?" And she had it! And she was paid over $40 million for the valuable information!

And just like Jeffry Picower, who immediately closed up his Foundation and related companies, after the Madoff ponzi scheme became public versus "known" (and after $5.1 billion lined his pockets) Ms. Kohn, immediately went into hiding.

Her excuse was different. Her "clients" were Russian ogliarchs. Look at the spin in the NY Times about her:

"Mrs. Kohn has dropped out of sight, leaving the firm she founded, Bank Medici, in the hands of Austrian regulators, who took it over last week.

But another theory widely repeated by those who know Mrs. Kohn is that she may be afraid of some particularly displeased investors: Russian oligarchs whose money made up a chunk of the $2.1 billion that Bank Medici invested with Mr. Madoff. “With Russian oligarchs as clients,” said a Viennese banker who knew Mrs. Kohn and her husband socially, “she might have reason to be afraid.”

...But several people with knowledge of her personal and professional dealings say she became concerned about retribution by Russian investors after Mr. Madoff’s arrest last month."

Yeh, right. Her lawyer can find her, but the oligarchs can't!

Every scamming organization, always has a front person that appears decidedly above board. Look at Goldman Sachs, and their mouthpiece, Abbie Cohen. The doughty, matronly, grandmother appearing front woman. Isn't she just so "trustworthy?"

Isn't that the rub? After all, do grandmothers steal money? That's not the question.

The issue is--Do grandmothers believe their sons or grandkids are thieves?

(Don't however, look at Goldman's corporate counsels. You might assume that one of these folks was coveting Dorothy's ruby slippers!)

Is it any different here with Sonja?

Another front person, for another scam.

The only difference between her and Goldman Sachs, is that Goldman has the blessing of the U.S. Government!

And Madoff investors just need to prove, that Sonja Kohn had the blessing of Bank Austria.

And then, they'll get a few more billion to divide up!
Posted by Palmoni at 6:57 PM


Here is my blog: mannheim Kindergeburtstag