Golman Sachs new motto: Do as I say, not as I do 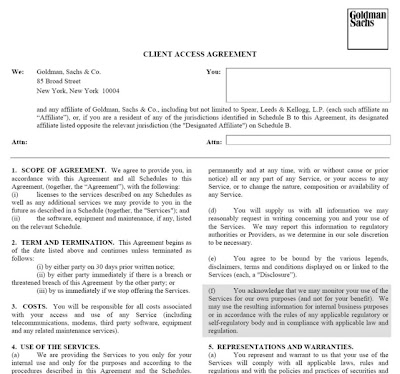 Soon Treasury will names it's toxic fund managers-but of course the plan to sell it's toxic loans has been delayed indefinitely--because now these supposed toxic assets aren't toxic.

But look at the selection process from today's WSJ:

To help minimize concerns about political influence on the selection, the fund managers were selected by career staff at the Treasury and then approved by an investment committee established to vote on TARP investments, people familiar with the process said.

It seems Treasury is giving the appearance of having learned. In today's WSJ, we have a story about William Dudley, who was jammed into the NY Fed without allowing the directors a say . Dudley, who now runs the New York Fed, had extensive lobbying by Tim Geithner--so much so that two New York Fed directors, Jeff Immelt of GE and Indra Nooyi had concerns.

Indra Nooyi, who she saw the hypocrisy and stepped down from the NY Fed board in February, at one time asked, "What are we doing here?" in regard to the directors limited role. She was also critical of the Fed's handling the bailout of AIG.

When Goldman executives are in charge, they only pretend there is transparency.

This morning on CNBC, we had an executive from Gulf talking about oil. Joe Kernan said, "Isn't oil going to 85? Goldman Sachs says it is."

He was too kind.

It looks like Goldman has started their oil selling already!

But why wouldn't they?

Goldman uses their client's transparency to trade!
Posted by Palmoni at 7:57 AM