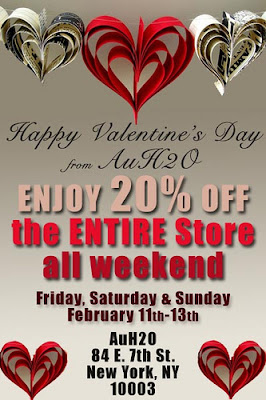 Here is the owner of the store, Kate Goldwater: 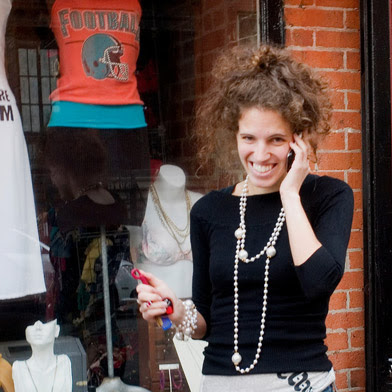 Here she is in the New York Times:


From Secondhand To One-Of-A-Kind Rhea MahbubaniKate Goldwater specializes in using discarded or secondhand items to craft new fashions.
In a neighborhood that is chock-full of chic boutiques, Kate Goldwater is doing her best to stand out. Ms. Goldwater, 26, a self-proclaimed “social justice crusader” designs an environmentally-friendly clothing line for AuH2O, her East Village boutique. All her designs are made from recycled items. Ms. Goldwater gets discarded or secondhand clothing wherever she can ̶ including the Salvation Army,Goodwill, clothing swaps – and transforms them into one-of-a-kind pieces.
Ms. Goldwater has been running AuH2O (the chemical symbols for Gold and Water) since October 2006, but last month she took on three business partners; Rachael Rush and Alexandra Sinderbrand, who sell vintage and thrift store clothing, and Rose Kennedy, a jewelry designer who creates trinkets from salvaged items. Now all four women sell their gently-used finds and original designs in the boutique and split the monthly rent.
In the past Ms. Goldwater received attention for creating unconventional clothing, including a tie made from credit cards and a dress made fromMetroCards, which earned her a cease-and-desist email from an MTA lawyer. However she has recently turned her attention to more wearable clothing saying, “I want to make recycled clothes that people wear for a long time. People thought of the unusual designs as novelty items that they wore once. That isn’t so eco-friendly.” She also produces tailor-made items for customers by updating clothing that they no longer wear.
Ms. Goldwater spoke with The Local about three of her recent sartorial transformations: Kate GoldwaterAfter: Safia Karasick Southey, 12, in the vest she plans to wear for her Bat Mitzvah.
“I made this for a 12-year-old girl’s Bat Mitzvah. Her mom gave me the ties that they liked and I decided what order they would look best in. The toughest part was that the girl’s waist is only 24 inches and my mannequin has a 28-inch waist, so I had to eyeball it.”
“It took me six hours to make and I charge $30 an hour for custom-made pieces. I wouldn’t make this for the store because I prefer that everything in AuH2O is under $100. I want my clothing to be affordable for artists and students. I did make similar tie skirts that I sold in the store for $55 each. They were faster to make so I was able to set a lower price.”

Kate GoldwaterBefore: A fraying tank top from a thrift store. Sally LaucknerAfter: A lingerie-inspired dress.
“I have a hard time following trends because if I make things that are in style then they go out of style and you stop wearing them, which is so wasteful.”
“I would never tell my customers to buy all new things for fall and then more things for spring. But I noticed that lingerie details were in and I liked them. So I made this dress which is flirty and fun but not so trendy that it’ll go out of style.”

Kate GoldwaterBefore: A brown cardigan that was a hand-me-down from Ms. Goldwater’s friend. Sally LaucknerAfter: An army print tunic.
“I prefer clothing with some stretch in the material because then it fits a wider variety of sizes. This tunic can fit sizes 0-8. I cut the top half off of the cardigan and sewed it onto the tank top.”
“I also replaced all of the original buttons on the cardigan with vintage buttons. Each of these buttons is different, which I like because it isn’t perfectly uniform. This took under an hour to sew, so I’m able to charge $28.”
AuH2O, 84 East Seventh Street, 212-466-0844. www.auh2oshop.com 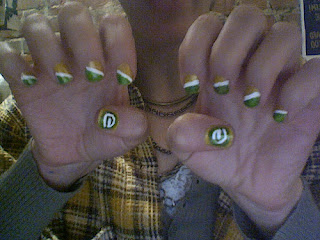 And here she is with her Green Bay Packer Super Bowl fingernails!

Come one Wall Street. Dig in your pockets and get your mistress or wife something eco-friendly and unique from the East Village!

It's good stuff. I have a few shirts.

And here she was a few years ago.

This weblog is much more interesting for all visitors. This editorial is useful for me and I am happy to read. It's nice. I hope to share other information web!

[url=http://www.iystwowgold.com#wowgold]wow gold[/url], I just like the model I dress in games gold virtually day-to-day.
Most are great games gold ihad individuals around A at this moment but yet anybody stole these products:( regardless i am ending up with a brand-new set soon!!!!!!
Your lady claims "they will be the many impressive games gold ever"!
I want to buy some [url=http://www.d3kiss.com/]diablo 3 gold[/url] . I'm nevertheless slightly iffy. they can be absolutely lovable and really elegant! only if my mom could afford them! they're entirely MY type.
My spouse and i really enjoyed any of these games gold from the time That i determine attention in them. However, when My wife and i given any of them I couldn't get regarding -- above was too tightly fitted about the legs, despite the fact I possess reduce legs -- i required to transmit them back. Heart-broken :No(
They're my favourite [url=http://www.d3boy.com/]d3 gold[/url] that I have actually purchased! They are so good and trendy. I prefer these They also glance cute with skirts. I will probably be acquiring the black as nicely.